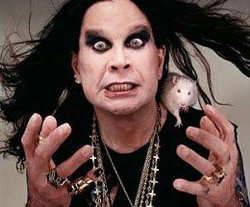 After decades of guzzling booze by the case, abusing countless drugs, urinating on public monuments and biting the heads off bats and doves, the prince of darkness has not only survived, but is healthy.

He's just as amazed as we are. In fact, the Sundays Times of London now has a column titled "Ask Dr. Ozzy," which states "after using and abusing his body for decades, [Dr. Ozzy] wants you to learn from his mistakes."

In an attempt to figure out what on earth is going on inside that seemingly invincible body, Osbourne has decided to have his genes mapped. The process involves help from three separate companies, including a genetic-sequencing company from St. Louis, Cofactor Genomics. An article from the St. Louis Business Journal explains:

Cofactor will start the tests within the next eight weeks and perform the work for free. Ozzy approached [Cambridge, Massachusetts-based] Knome, which charges about $65,000 to analyze genome, about wanting the service done as research for his new health column for the Sunday Times of London. "By all accounts, I'm a medical miracle," Osbourne wrote in his "Ask Dr. Ozzy" column. "I was knocking back four bottles of cognac a day. While filming 'The Osbournes,' I was shoving 42 types of prescription medication down my neck, and that was before all the dope I was smoking. And then there was the rabies treatment I had to go through after eating a bat."

Cofactor Genomics was founded in 2008 by Dr. Jarret Glasscock.