Expect a lot from the next sentence. Among its other virtues, Tool's sold-out concert at The Family Arena last night answered one of life's Big Questions: Can an art-metal band that thrives on obscurity still get 11,000 people to stand and shout without pause in one place for two straight hours?

"Whatever is going on out there has nothing to do with what is going on in here," said lead singer Maynard Keenan. He was right.

Tool has released four totemic albums since 1993. Each album contains complex and vexed passages of prog-metal that quicken and thicken: Basslines become baroque, drums carry heft and weight and the guitar parts swell and recede into riff cyclones. The band touched on every album during the concert, starting with "Third Eye," a fourteen-minute opus from 1996's Aenima. That song was formidable -- a particle collider of symphonic movements and primal screams -- but no more so than any song that followed.

What followed were churning songs full of exploratory dynamics. Hearing Tool in concert made you realize how much its songs, often so dense and recursive, are about waiting and deferred gratification.

You might even say attending a Tool concert requires patience. On a superficial level, the band's set could be reduced to a series of specific moments: the return of the pocket swing at the end of "Stinkfist"; the double bass drums in "Vicarious"; the distempered mantra of "lie, cheat, steal" in "Intolerance"; the very second the crescendo in "Schism" went from built to collapsed. On a deeper level, Tool's set was metal that just so happens to make you think about what you're hearing -- or gives you the time to do so -- while you're hearing it. (Industrial blues that happens to startle would peg opener Wovenhand.) 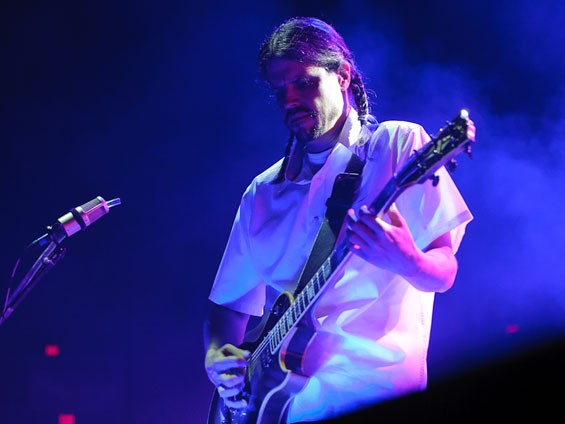 Drummer Danny Carey, with ocean-liner power, pounded more toms than could (or maybe should) be counted. In "Forty-Six & 2," bassist Justin Chancellor's ginchy sludge conversed with Adam Jones' grinding and pummeling guitar patterns. Keenan was a shadowy and inscrutable presence all evening, silhouetted at back on the drum riser. His voice, even on more challenging songs like "The Patient," was usually strong and percussive. If the concert required patience, it also demanded a sense of introspection. Part of waiting out the blankets of noise meant inspecting the onstage visuals, which had a special centrality. Jones, responsible for most of Tool's visual sense, has compiled a redoubtable body of work for the tour. (Only Rob Zombie's collection of found footage, in my experience, comes close.) Several screens showed his humanoid-gothic videos for the band's singles; the rest of the songs got lasers and elliptical imagery that traded in occultism and creepified anatomy and physiology. 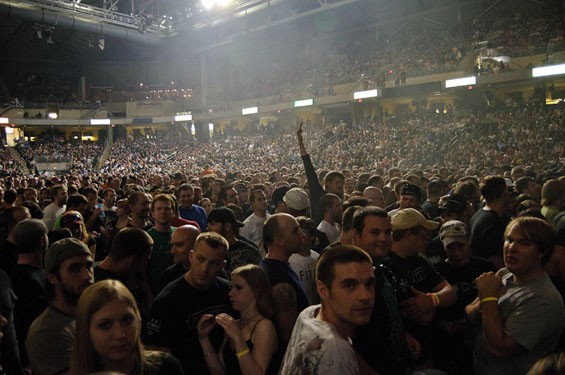 The result of those visuals and an effaced lead singer was a visceral experience where the music invites confrontation. Confrontation with its uncanny virtuosity, with its lyrics of ruin and portent -- and, finally, with the salient fact that avant-garde metal, in the right hands, can get 11,000 people to stand and shout. Tool withholds, success unfolds.