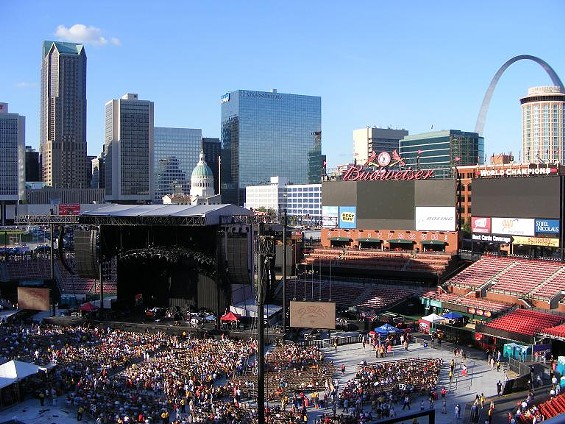 The Eagles played it straight last night at Busch Stadium and managed to please everyone: the younger set relatively new to their catalog of country-rock classics as well as fans who have waited more than 35 years for this show. More than a few times, the stands echoed with the phrase, "Once in a lifetime."

Both the Eagles and the Dixie Chicks have a history of toeing the line between goes-down-easy mass appeal and piss-off-your-demo politics, and the bird-named bill made even more sense after seeing the bands back-to-back. 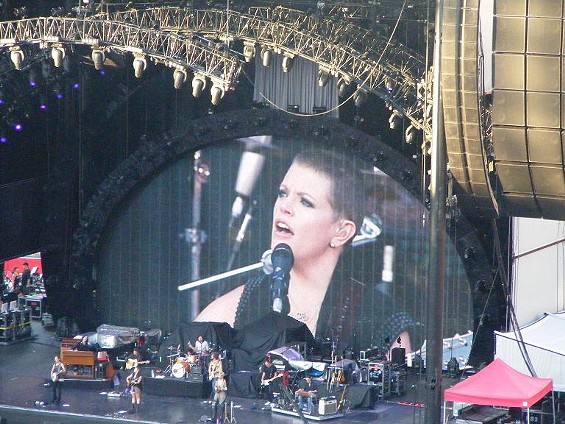 The Dixie Chicks, too, has melded country, bluegrass, rock and pop for years -- they covered both Bob Dylan and Train last night -- and, if the band was ever outside the snug embrace of mainstream approval, well, it's back now. As the sun laser-cut down the first base line, the Chicks kicked into 1998's "Wide Open Spaces" to a mostly-full stadium. Lead singer Natalie Maines, sporting a close-cropped "pixie chick" haircut, sounded strong as ever throughout the set, her unique voice alternatively ringing out, leaping and breaking in just the right places. All the elements were in place during a hit-laden set spanning its career: Emily Robison's sweet banjo, Martie Maguire's nimble fiddle, Maines' spunky snarl. The biggest hoots went up for won't-back-down anthem "Not Ready to Make Nice" and "Sin Wagon" - which includes the once-controversial lyric "mattress dancing" - proving that any past perceived sins are indeed forgiven.

Appropriately enough for the venue home to a Cardinals lineup, the Eagles' set was a long string of hits. With the four members - Glenn Frey, Don Henley, Timothy B. Schmit and Joe Walsh - standing at the front of the stage, the show started with the signature a cappella harmonies of "Seven Bridges Road," which was enough to raise neck hairs on a St. Louis summer night. The Eagles spurred directly into country testifier "How Long" off 2007's Long Road Out of Eden; meanwhile the beer vendors whispered warnings of "last call." It was 8:54 p.m. - for thirsty upper-deck dwellers, it was time to take it to the limit.

The mostly middle-aged crowd around me perched comfortably in the hard-backs for the show's duration, but their seat-dancing, hand-waving and singing along were emphatic. When a Spanish trumpet sounded before the fourth song, audience members cried, "They wouldn't play it this early, would they?!" Sure enough - curveball! - Henley behind the drums boom-boomed into "Hotel California."

Each of the members took turns on lead vocals and in taking command othe stage, as the set paid homage to the members' solo careers, as when Schmit laid down a Bee Gees-style cushion of falsetto on "I Can't Tell You Why." (They did not play Frey's "The Heat Is On," but the H was definitely O.) The solo hits might even have gotten the most audible thrill from the audience - especially on Henley's '80s-era staple "Boys of Summer" and Walsh's comic "Life's Been Good," during which he updated the lyric to "they send me emails, tell me I'm great."

In fact, most anything that Walsh did was greeted with raucous approval, and whether tightly strumming his guitar or beaming his beloved nasal whine to the back of home plate, he did sound great. They all did. Vocal chords and musicianship intact after nearly 40 years of rock stardom, excess, in-fighting, break-ups and reunions? Somehow, the Eagles did it, and emerged as consummate professionals.

While banter with the crowd was limited and with each other nonexistent, Frey did extend nods to our local consummate professionals: "We probably drank more Budweiser than any other band in 35 years," he said, and "We're in Albert Pujols' house."

While no errors were committed during the course of the show, there were also no out-of-the-park home runs. Walsh funked things up as usual, but the set list didn't deviate from the rest of their tour stops by even one song, and the band could have pushed the songs further by tripping out the guitar work or adding a vocal surprise. Eagles fans will let them spread their egos' wings and indulge - the crowd already paid $85 to sit on the other side of a city block to hear them play.

From basically any seat in the house, other than the first twenty rows of the center field "floor," it would be easy to feel disconnected from the performers and the magic you're certain is happening onstage. The crowd out where I was made the most of its surroundings: strangers shared seats, favorites and song-specific memories and dancing people became best buds with the row behind them, even if their shaking asses blocked the view of the tiny dotted figures under the lights. By the time the crowd swooned, swayed and wiped away tears during show-closer "Desperado," the music we love had simply become part of the night and its celebration.