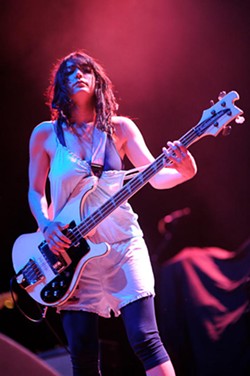 If you like indie rock, the concert announcements this week have pretty much been like Christmas and your birthday all rolled up into one. Between Vampire Weekend/Beach House/The Very Best, the Walkmen/Japandroids, Someone Still Loves You Boris Yeltsin/Telekinesis and Toro Y Moi, plenty of genre heavyweights are coming to town in the near future.

Add several more up-and-coming bands to the pile: WarPaint -- fresh off opening for the Temper Trap -- and Javelin (not this band, this band) will be playing at the Luminary Center for the Arts on Thursday, August 5. (That's the same night as Deer Tick and Dead Confederate.) That Pitchfork link describes Javelin as "an otherworldly radio station based in some crate-digger bunker where genre distinctions are a distant memory. Unidentifiable hip-hop, rock, oldies, and rhythms from all over the world mingle across the tape's ramshackle tracks." Well, all right. Tickets are available now right here.

Incidentally, I hear rumors of another band I've heard people chattering about coming to Luminary soon, but that info's TBA...so stay tuned.