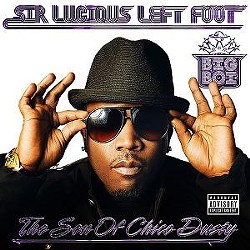 In anticipation of his new solo album, Sir Lucious Left Foot: The Son of Chico Dusty, Big Boi has been holding private listening parties in select cities across the country. Last night St. Louis got a sneak peek at the upcoming project, as local entertainers and media personnel came out to network and show their support.

The event was held at Shock City, one of the area's more upscale recording studios. This ended up being an excellent choice of venue: The sound and lighting were both excellent, and the limited amount of space -- I'd estimate about 75 people in attendance -- kept the vibe intimate.

For those unfamiliar, Big Boi rose to fame as the '"street" half of Atlanta-based rap duo OutKast, alongside the more eccentric Andre 3000. Since its debut in 1994, Outkast has earned a reputation as one of the most creative forces in hip-hop, thanks to its consistently experimental music.

After a brief introduction by the artist himself, the album was broadcast throughout the studio. Left Foot (due out July 6) was packed with fast-paced, bass-heavy tracks complemented by Big Boi's aggressive and often frenetic verses. From what I could tell, the production quality was pretty high overall -- the low end was smooth, the vocals were clean, and the high end was crisp. Songs ranged from the guitar-funk-driven intro track "Feel Me," to the up-tempo, synth-heavy "Shutterbug," to a march-inspired choir and brass samples on "General Patton." The music mainly served as a backdrop for many of the attendees who were busy shaking hands, taking photos and exchanging business cards.

Prior to hearing the album, I was given the opportunity to have a few words with Big Boi. When asked about guest appearances on the album, he mentioned T.I, Gucci Mane, Jamie Foxx, Too Short and George Clinton. Contributing producers on the album include Organized Noize, Scott Storch and Lil Jon. "I started working on the album on Martin Luther King's birthday in 2007," he recalls," and I got it mastered on Andre's Birthday this year -- which was May 27. It took me 40 months to finish, but it's here now, and it's just fun, jammin'-ass music." He also mentioned that he's looking at Jay Electronica to possibly accompany him on tour after the album release.

He confirmed that the following projects are in the works: an Andre 3000 solo album, a new OutKast album, and a Dungeon Family compilation album. When I pressed him for a release date for the OutKast joint, he jokingly replied "It's top secret. If I told you I'd have to kill you." I asked him how his music has continued to evolve since the Idlewild soundtrack. His response: "Music is like a time capsule. It reflects what you're going through at that time. As people grow, their music should too."