Show Review + Photos: Blitzen Trapper and the Moondoggies Swelter and Sway at Off Broadway, Monday, June 21

"Sweat," remarked Marty Marquis, guitarist for Portland, Oregon's Blitzen Trapper, "does bring us together." Due to the heat, the band took numerous towel-off breaks during its show last night at Off Broadway. Had the venue not been sweltering, the pickpocket-close audience would have still witnessed a workout. The air might have been stagnant and heavy, but the music was fizzy and pungent with a formal exactitude.

More than once did the band appear to excavate old AM radio gold. There are reasons for making that mistake. Blitzen Trapper works within the grammar of '70s Laurel Canyon folk-rock, an era sacralized by toy-bright melodies. It also has the lyrics (bucolic, non-specific) and voice (single-malt, droll) of bandleader Eric Earley, who communicates ripe self-possession from the stage. The six-member band played with a wisdom and alertness that avoided frippery and enthroned timeless songcraft. Its performance was as comfortable as creased leather. 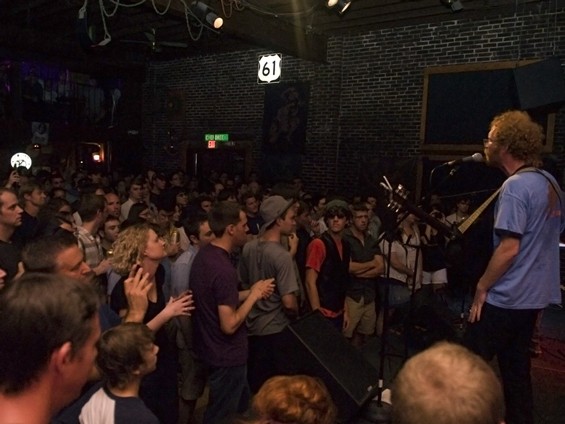 Now five albums deep (plus a bushel of b-sides), the band focused on Destroyer of the Void, the most recent and least sonically promiscuous of its releases. Every arrangement, however, was reflective of the gluttony of six in-sync musicians; they transformed and amplified Earley's compositions into lungfuls of heat and light. "Dragon's Song" had elements of both, thanks to its sunstruck chorus and giddy-up vigor. Three barnburners -- "Silver Moon," "Wild Mountain Nation" and closer "Big Black Bird" -- fevered the room with halogen guitar licks and harmonic plentitude. (Incidentally, what does it take to get all the ceiling fans at Off Broadway cranked to high? Runaway lava? An incipient supernova?)

Not everything was gluttonous. Earley went stage solo for "The Man Who Would Speak True," and the restrained treatments of "Not Your Lover" and "Lady on the Water" speared down their pokiness and gloom. A Pavlovian trigger for hand-swaying, "Furr" was every bit the campfire hymn, improved still by the abrogation of its forest howls and chirps. Some in the crowd, though, added their own.

And yet on its more experimental efforts to jam out or to prog away ("Sleepytime in the Western World," "Destroyer of the Void"), Blitzen Trapper was just enumerative and encyclopedic, generating sections of disjointed sound. Such efforts lacked timelessness. Those songs might have made you sweat, but they didn't bring you together.

The Moondoggies also hail from the Pacific Northwest, and wrung a kind of berserker fury from its opening set. On songs like "Changing," the quicksilver guitar slashes and the hothouse harmonies swarmed around until they achieved a goblin air of indignation. Singer Kevin Murphy introduced a few new songs from the band's forthcoming second album, and each was as nonstop and turbulent as the next.