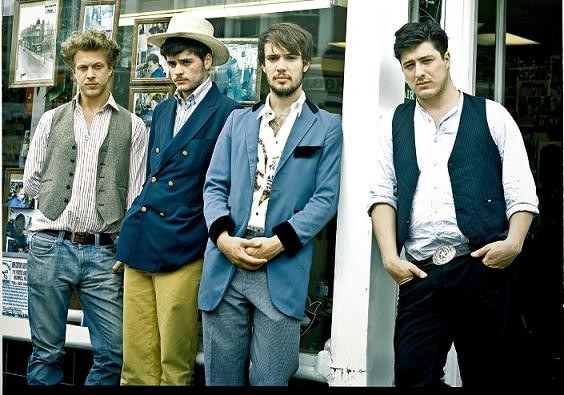 The World Cup wasn't mentioned once during the Mumford & Sons show at Off Broadway last night, but the long sold-out crowd thundered with approval for Brits whipping us at our own game. Bringing a polished version of rollicking bluegrass and heartbreaking harmonies, Mumford & Sons led a leather-shoe-stomping hoedown.

Ok, so the folk-inspired quartet draws from the well of traditional British music as well as Americana, but it's hard not to hear in them the soaring, shifting, banjo-thrashing, instrument-swapping energy of stateside acts like the Avett Brothers. Case in point: The lads, perhaps preparing for their upcoming gig at Telluride Bluegrass Festival, encored with a jaunty barroom cover of Old Crow Medicine Show's "Wagon Wheel."

Lead singer/songwriter Marcus Mumford littered debut album Sigh No More with literary references, lifting full quotes from Shakespeare, the Bible and Bob Dylan, and lending his lyrics a universal quality. Maybe this collective (non-specific) appeal is why the audience seemed to know every word to every song, but in any case, it's a lot of cathartic fun to holler lines like, "I'll find strength in pain, and I will change my ways."

From set - and album - opener "Sigh No More," one could pick out fleeting Celtic tunes, references to '60s Brit folk and Fleet Foxes altar boy harmonies. But Mumford & Sons mainly channeled a windswept American landscape - and didn't skimp on the Steinbeck. On hushed "Timshel," Mumford's voice was like dynamite in the mine. Regular set-closer "Dust Bowl Dance" saw Mumford behind the drum kit and banjo/dobro player Winston Marshall wailing on whatever stringed instrument happened to be in his hands. The song acts like a tornado - smearing in slow rhythm across the horizon, then bursting into crashing frenzies of banjo, guitar, piano, cymbals, drums - touching down then lifting for a menacing moment of calm.

Timing is everything with Mumford & Sons; every song is a switchback road pulling the listener high and low, stalling then surging. On single "Little Lion Man" - a shambling confession with a thumping back end - the crowd was so riled by the frantic rushes of picking and piano that singing and cheering drowned out the silences so carefully placed on the record. These stop-starts are designed to pull the rug out from the listener, but this crowd was stomping the planks with too much glee to notice. "Feels like we've been invited into your home," Marshall told me after the show, where he and other band members chatted with fans outside their bus. He said the venue was great, and that they'd been surprised at such a reception because they feel "a long way from home."

At that point in conversation, I was shuffled away by the friendly hordes who couldn't wait any longer to hang out with Winston, so I didn't get to ask why they didn't play "Winter Winds," one of the album's catchiest, winsome tunes, nor did I sort out his interesting instruments. (The banjolin, anyone?).

Last night was probably your last chance to see this band in such an intimate venue. With any luck, Mumford & Sons will remember the piping-hot welcome they received in St. Louis, and return to once again show us how it's done.