Alex Ebert looks like the the leader of a cult. The frontman of Edward Sharpe & the Magnetic Zeros wears a simple white robe with white trousers underneath and a long red sash draped around his neck. His hair is a tangled bird's nest with a few errant, unkempt strands dangling down to his shoulders. He rambles, mumbles and paces the stage when he talks, telling stories about his childhood.

The first one is about his therapist father, who told him as a five-year-old that someday he would die. "After that," he says with a morose chuckle, "my life was pretty fucked up for about the next 20 years."

Jade, his girlfriend and co-leader of the band, resembles a brunette version of Amanda Plummer's Honey Bunny character from Pulp Fiction. She's wearing a white t-shirt with the with the words "Love is all I am," handwritten in magic marker on the front.

"Alexander," she says gently into the microphone. "Remember Mexico. All life is eternal."

And just like that he snaps out of his funk.

The drummer launches into a timpani roll and the guitarist strikes the opening chords to "Up From Below," Ebert's cathartic ballad that compares his recovery from addiction to reincarnation. "I've already suffered," he sings on the chorus, "I want you to know God/ I'm ridin' on Hell's hot flames comin up from below."

The melody ebbs and flows with the thrust of the hodge-podge ten-piece symphony assembled on stage: a beat-up piano, a violin, two guitars, a bass, a xylophone and a half-dozen different percussion instruments, including a tambourine that Ebert pounds rhythmically against his chest.

Most of their songs follow the same winning formula and this one is no different. It builds and builds and builds, gets quiet at the bridge and then swells back up like a huge breaker of a wave that crests in crescendo and fades out with multi-part vocal harmonies

All this would seem awfully heavy and spiritual -- like everyone should be offered a cup of spiked ceremonial Kool-Aid just before the encore -- if Ebert and company weren't having so much damn fun while they were doing it.

On their lone hit, the über-catchy duet, "Home," for instance, Ebert and Jade exchange the cheesiest vows possible ("Well, hot and heavy, pumpkin pie, Chocolate candy, Jesus Christ -- Ain't nothing please me more than you") and yet somehow manage to seem silly and sincere at the same time. They prance around the stage and look into each others eyes and belt it out without the slightest whiff of self-consciousness.

With apologies to fiddle-playing St. Louis native Nathaniel Markman, the band member that stood out the most was Stewart Cole, a jack-of-all-trades who played everything from the ukelele to a handheld keyboard/sythesizer hooked up to a MacBook. He absolutely killed the trumpet solo on "Home," and added a twist with a battered-looking baritone horn that he later said he "just bought down the road today for $15."

On "Om Nashi Me" the members of the opening act Dawes came out (for a grand total of fifteen people on stage) to play all manner of shakers, rattles and tambourines. Ebert led the chanting chorus "Om nashi me, I will love you forever" until it was just a repeated incantation of "ommmm" with no backing music. Then the everyone in the band clapped frantically and the song came surging back with a trumpet solo and a booming wall of sound. Ebert rolled around on the stage in ecstasy and during the fade out he just slumped on his knees, his head bobbing gently. 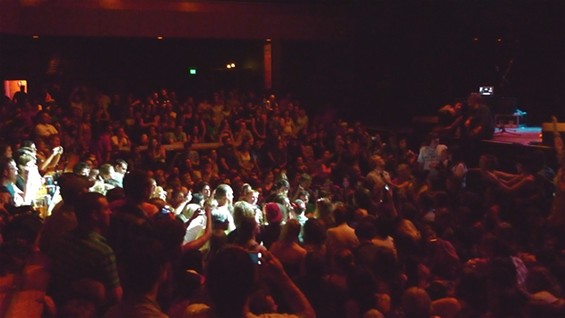 After a disorganized pause (apparently the band wasn't working off of a setlist and Ebert said they didn't want to do the "typical encore thing where we leave and you clap and we come back.") they played a new song and then the gentle dirge "Brother." For this, Ebert waded into the heart of the packed general admission area and asked everyone to sit down with him. The band members perched on the edge of the stage, just the guitarist still holding his instrument.

Ebert sang the song softly, amid almost total silence from the audience pressed up against him. It was beautiful and somber and no pitchers of Kool-Aid were passed around, though by then everyone probably would have taken a swig if it was offered to them.