Devo Releases First Full-Length Album in 20 Years, Changes its Energy Domes and Parties with Cats and Other "Furrie" Creatures 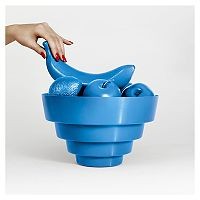 Devo's been keeping pretty busy lately. In April, the infamously nerdy band released the 12" single "Fresh" and reissued Duty Now For The Future for Record Store Day 2010. The release of "Fresh" not only formally announced the name of the forthcoming record, Something for Everybody, but it also showed off that the band's iconic red energy domes had been replaced by similar domes colored electric blue.

Devo has several television performances scheduled for the coming week to promote and celebrate this new album (The Late Show with David Letterman on June 15, The Colbert Report on June 16, Live with Regis and Kelly on June 18, to name a few).

In addition to the standard promotion that goes along with a new record, Devo is hosting a nine hour-long live cat party. What is a live cat party? Generally speaking, we're not sure, but in this instance it's "20 cats getting down to the new Devo album for nine whole hours" (clubdevo.com).

Warner Brothers Records is hosting the party, which is essentially twenty cats locked in a room while Something for Everybody plays on a loop. Press and fans are welcome to show up and view the ...festivities (?) from the patio. For those of us not in the L.A. area, Devo will be streaming the entire event live, beginning at 1:00 p.m on Tuesday, June 15.

Speaking of furry critters and bizarre events, Devo recently found itself staying at a hotel in Irvine, California, that happened to be hosting a furry convention that same weekend. What do you do when life gives you a hotel full of people fond of dressing up in elaborate animal costumes? If you're Devo, you complement their look with your promotional energy domes and take lots of photographs.

Devo's comeback has continued picking up strength ever since its 2009 tour. These odd ventures serve as proof that Devo doesn't plan on straying from the strange anytime soon.