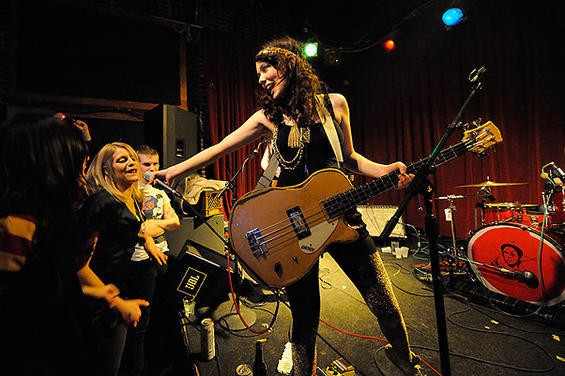 The local American music festival Twangfest is now in its fourteenth year. Long past its adolescence and its awkward phase, the booking for the four-night showcase shows that its teenage years are both classically minded and musically adventurous. For every old-timer on the bill (Ray Wylie Hubbard, Jason & the Scorchers), the Twang Gang brings in new talent as well. Friday night's line-up skewed younger with two up-and-comers (JC Brooks & the Uptown Sound and Those Darlins) and one established garage-rock favorite (the Detroit Cobras).

Hailing from Chicago, JC Brooks & the Uptown Sound opened the night a little after 8 p.m. and wasted no time ingratiating itself with '60s soul-revue licks and plenty of James Brown-indebted drum breaks. Sharon Jones & the Dap Kings are the reigning monarchs of this particular soul revival subset, but Brooks and his crew are proof that the scene has strong enough legs to support others. Of course, that all rests on Brooks' shoulders - bands like these live and die with their singers, and the bulky but baby-faced vocalist had all the right moves, from extemporaneous soul-shouts to Marvin Gaye-worthy crooning.

Brooks & the Uptown Sound have found no shortage of blog love thanks to its cover of Wilco's "I Am Trying to Break Your Heart," which came early in last night's set. The band is smart enough not to paint itself in a corner by reworking indie hits as Stax/Volt classics, but as a one-off it works beautifully. (In particular, interspersing part of "Theologians" in the bridge is a masterstroke, and proof that Brooks is a skilled stylist and interpreter.) The Uptown Sound's originals kept the vibe percolating; "Baltimore is the New Brooklyn" should be adopted by Charm City's tourism board and "Beat of Our Own Drum," the title track to the group's LP, closed out the set with a heavy thumping bass line.

JC Brooks & the Uptown Sound won over the crowd with smooth soul and hot horn lines, but Those Darlins proved more divisive. The five-piece looked more like an art-rock collective than a country-garage girl group, taking the stage in tattered hospital gowns (a nod, perhaps, to singer/ukulele player Nikki Darlin's broken arm. She made the best of a bad situation and used her sling to ferry a PBR tallboy to the stage). Nikki, along with her "sisters" Jessi and Kelley, play junked-up country rock that sounds like your grand-dad's C&W record collection being kicked down the stairs. None of the three ladies have a remarkable voice, but when they sing in congress (but rarely in harmony) the songs take on a lovably fucked-up quality. Last night's set was particularly loud, perhaps due to overdriven amplifiers, and eventually the sound man was able to make the vocals more present in the mix. But by that point several patrons had decamped to Blueberry Hill's upstairs bar (where, to be fair, you could still feel the bass frequencies from below). Those who stuck it out until the end were in for a treat, and not just because Nikki liberated herself from her hospital gown. A ten-minute version of "Shakin' All Over" (written by Johnny Kidd but popularized by the Who) was a blast of fuzz bass and snaking guitar lines. Some joker in the crowd tried to up the ante by throwing a roll of toilet paper on stage; Nikki responded with a spit-take of PBR, dousing the first few rows with spittle and cheap brew. Consider it a baptism from these Tennessee ladies.

The end of Those Darlins' set veered towards sloppy British Invasion licks and sweaty garage rock, which was a fitting intro for the Detroit Cobras. But where Those Darlins were long on antics and short on discipline, the Cobras were the model of professional, efficient garage rock. The songs were dirty but the performances were clean, and singer Rachel Nagy didn't need more than her smoky vocals and a cool stare to win over the remainder of the audience. The band built its reputation through well-executed covers of songs by the likes of Irma Thomas, the Shirelles and Garnett Mimms, but they owned each performance. The slinky "Puppet on a String" was a highlight, and the proper set ended with Ruby Johnson's "Weak Spot." After a quick smoke break, the Detroit Cobras returned for a few more songs, ending the night the way it began with the Uptown Sound: with a Detroit groove that would have made Berry Gordy proud.