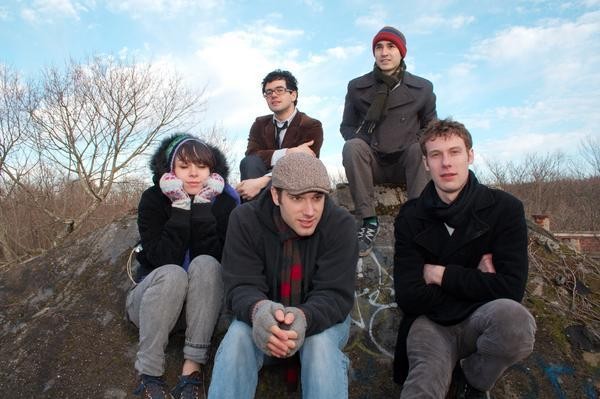 If not an outright winner, Freelance Whales is certainly a contender for indiest of indie rock bands at this very moment. (That statement is purposefully ambiguous, or meaningless.) Last night at a surprisingly populated Off Broadway, the launchpad excitement for its first visit to St. Louis could have been measured, like rainfall, by the inch.

A new group from Queens, New York, Freelance Whales came to town to reproduce Weathervanes, its recently released debut, with almost as much glockenspiel, banjo, microKorg, and harmonium as found on the record. This kind of polyglot instrumentation did not, it should be noted, come off as quirk or gimmickry. Such intransigent dedication to those instruments is both the band's mission and its meaning.

This all depends, of course, if you like your music florid-static or slender-mobile. Weathervanes is essentially one long dreamscape, a florid concept album of static songs that hover and gather. While the five-piece band often harmonized together, bandleader Judah Dadone and bassist Doris Cellar were the vocal backbone, their interplay on "Starring" and "Generator (First Floor)" as important as any banjo flourish. But how those flourishes matter.

Last night a song like "Hannah" would have been a serviceable litmus test. When you wanted it to subtract and hurry up live, it lingered into a kitchen-sink tone poem that name-checked mumblecore (throat-clear) masterpiece Hannah Takes the Stairs. It was all wispy mood, as sweet as cotton candy dunked in corn syrup. Guitar, bass and drums merely serviced that mood and supplemented the less-rockified instruments. If that song passed muster, then the evening was a success.

This is not to say, however, that the performance was an unqualified success. On songs such as "Ghosting" and "We Could Be Friends," the harmonies, so golden-crispy on album, sounded fragile and frail, each band member yielding, perhaps, too much to everyone else. Vocally and stylistically, comparisons to Ben Gibbard or the Decemberists aren't unwarranted (or, frankly, unwelcome) for Dadone. But then, in concert, Dadone's nebbishy, half-mumbled stage banter could -- to borrow a phrase -- boil the fat off a cabdriver's neck.

While its songs could be spread on waffles, Freelance Whales weren't nearly as pathologically precious as its album might lead you to believe. The set (at an hour and change) could have gone even faster, but the occasional slop and mess just meant the songs had a beating heart -- and, lo and behold, the group crunched out Broken Social Scene's "7/4 (Shoreline)" during the encore. Those Queens kids know their indiest rock bands.

Opening act Peter Wolf Crier -- Minnesota duo Peter Pisano (guitar, vocals) and Brian Moen (drums, vocals) -- didn't owe its sound to a precise admixture of Bush and Nick Drake (as Pisano joked during the set), though the better songs from its debut, Inter-Be, were as ragged and as ministerial. Sitting down, Pisano leapt up when speed or volume called for it, his falsetto escalating to a bark. Speed and volume were the better bets: When things slowed, the vocal effects -- complementary on disc, distracting live -- turned chintzy. But when Pisano thrashed (as much as you can from a chair) and when Moen pounded, their anvil enthusiasm fulminated into confidence and reproach.