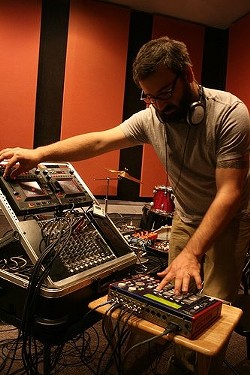 What do you do when you've been asked to perform at the RFT Music Showcase, and you just can't? Some bands would simply decline. If you're Tone Rodent, and you're pals with one of St. Louis' finest experimental sampling/mixing/distorting/manipulating DJs, Eric Hall, you improvise. Or, rather, you ask him to improvise.

And that's precisely what Tone Rodent did. The day before the showcase, Hall received a bundle of instrument and vocal tracks from Tone Rodent, all pieces of a recording of the so-far-unreleased track, "I Love You." He stayed up much of the night cutting and pasting them to prepare for the performance of this 16-minute rock/trance experiment that's nothing if not a testament to the limitless creativity -- and possibilities -- inherent within a DJ mix.

Lucky for us, Eric's all-nighter preparing for the project left him a little drowsy, and he forgot to hit the record button until a minute or so in ("I'm a bad multitasker," he explains in an email.) Because of this tiny mistake--which is utterly unnoticeable--the project which was being recorded for a proper release is now available for free online on Eric Hall's SoundCloud page. (It's also embedded below.)

The series of scheduling conflicts and buttons which forgot to be pressed resulted in a fantastic, free recording. But it also gave birth to a larger, future collaboration between Hall and Tone Rodent. The former says they plan to "do a proper EH v. TR album of the whole LP they're finishing; maybe put that out as a split or double."

In the meantime, hold yourself over with some of Hall's recent sets and Tone Rodent's music.

More information on the collaboration (musicians featured on the track, equipment used, etc.) is available here.