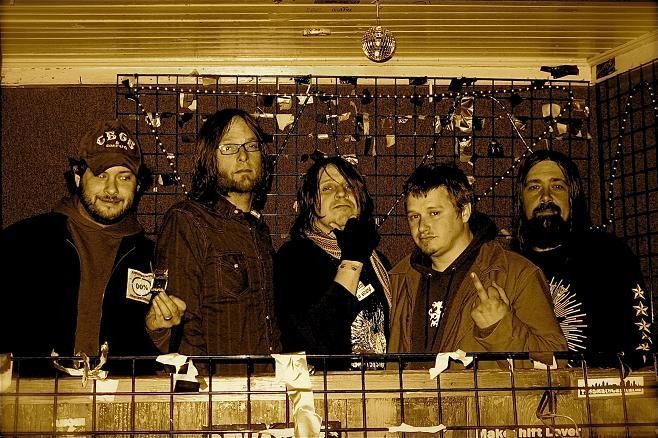 Underground sludge legends Eyehategod have pulled it together for what could be a breakout tour. The New Orleans band has been grinding it out since 1988, and it's been a rough, broken road. As documented in the group's lyrics, things such as addiction, incarceration and probation have taken a toll. Still, these haven't stopped the band from achieving cult status. If you don't worship Eyehategod, your favorite metal bands probably do.

Drummer Jimmy Bower plays in classic-rock revivalists Down, with former Pantera frontman Phil Anselmo. The other players have recombined as Outlaw Order and played in outfits including Soilent Green and Arson Anthem. Most have more polish and a little less raw power than Eyehategod, which has recorded for Century Media and released a string of splits and singles between four proper records and assorted compilations.

EHG albums such as Dopesick are quaking crates packed with songs such as "Dixie Whiskey," "Take as Needed for Pain" and "Kill Your Boss." Each tune has a dirty riff that might move at speed of molasses, but will leave you infected, bleeding, and blown away. Dirty doom gives way to bluesy Southern rawk solos and sudden punky sprints. Singer Mike Williams slavers out pure-torture vocals about things that will kill you.

On the day of the tour's opening night, press duties were being handled by the new guy in the group, Gary Mader, EHG's fifth bassist. Mader, a New Orleans native, has been with the band since 2001, after growing up on the scene and watching their muddy swamp metal from the crowd.

A recent European tour almost ended in tragedy: Mader lost his beloved silk-screened Buzzo*ven jacket in Dublin and posted a passionate plea for its return on the internet. It later turned up with some of the band's drinking buddies. Now the crushing quintet is staging its first van tour since 2005. And this time, the world might be ready for them. After an all-night drive from NOLA, Mader called from Orlando, where the band was about to play the first of eighteen US shows. He spoke in a light New Orleans accent that's equal parts French, British, and Southern-American metal dude.

Eyehategod is playing at Fubar tonight with Nachtmystium and locals Black Tusk, Fister, Divide the Past and Man's Laughter. Doors are at 5:30, the show's at 6. Tickets are $20.

D.X. Ferris: Why do you think the scene is so receptive to Eyehategod now? Gary Mader: I think it's a combination of things. There's been a lot of personal obstacles along the way that have kept us from moving forward. And if it hasn't been personal obstacles, it's been our other bands. The time for the guys to jam is now. The personal obstacles that held us back are mostly gone - we can move about freely. We're free to leave the state.

There's a new record in the works, right? We've been working on a new record. It seems now we're all in the right head to write a good record. We've got five songs completed and a bunch of riffs floating around that need to be arranged.

What does the new stuff sound like? It sounds like what Eyehategod fans would expect from us - the same downtuned [riffs], feedback, the same approach we've followed. Over the course of time, we've become a better band. It seems like we've gotten to the point where we all jam in the same head. We've definitely progressed a little bit musically. We became better musicians - I use that term loosely.

Do you have a label lined up? We tossed around some ideas, but everybody's priority is to write the record first.

Is [Phil Anselmo's indie metal label] Housecore a possibility? It's definitely one of the considerations. We've been talking to Phil and there.

What it like being on the scene with Anselmo? You read the stories, and some say he's like an older brother, or sometimes the dad, or some says he's the godfather of the scene. He's definitely not like a godfather. I don't know that we really think about it in those terms. We're just a bunch of friends that hang out and jam - not to say that Phil hasn't gone out of his way to help the band over the years. We don't really think about our scene like it's something special, but I guess it is.

Waylon Jennings or Willie Nelson? Willie Nelson. The Red-Headed Stranger is all I've got to say. Amazing record.

What drug is more evil: coke or crank? Crank. It lasts way longer, and it's dirty.

The band is so associated with addiction and the culture around it. What about that way of life is something that people outside of it don't understand? You've got to do it to find out. I don't think it's anything we pride ourselves on. We pride ourself on our music first and foremost. The drug thing, it's kind of maybe a little bit overemphasized. It comes from the early years of the band. They had some wild times that a lot of people were witness to. It's nothing we're embarrassed about. I give a shit. I do what I do. If you want to be straight-edge, fine with me.

Is it hard to stay straight on road? Yeah, there's always that. At every show, somebody's got some L-10s or blow or acid or some kind of drug for us. But in my case, I'm under state supervision in New Orleans. So I can't [get high], or I can't tour. It was a decision for me to block everything out so that I'm able to do the most important thing, and that's to jam.

You're from New Orleans. What do you have to say about the BP spill? Fuck BP. Straight up. The problem with all these big fuckin' companies is that they never forget to squash the little guy. And that's what happening right now. There's all these coastal cities in Louisiana where people have fished for generations upon generations, and that's all that they know. And for somebody's big fuckup like this, and to be so nonchalant and lazy about fixing it, it blows your mind. We thought we'd seen it all with Katrina. But this is a whole 'nother fashion of indifference toward all these people who can't help themselves. It makes you angry. I come from New Orleans, but I come from a family where fishing has always been high on the priority list. Not on an industrial level -- but in New Orleans, seafood is something that's very close to our heart. And to see somebody come along and stamp all that out over a mishap is amazing. It makes you wonder why don't we just secede from the United States.

Is that a common sentiment in the area? There's a lot of anger. People that usually don't give a shit about politics are up in arms, because it touches our culture and has a big effect. There's seafood restaurants. And aside from the seafood fishermen that are gonna be affected, it affects tourism and affects the progress of out city. We were doin' good coming back from Katrina. And for this to happen, it's like, what's next? And where's it going to end?

The really sad part is that they're recruiting all these fishermen to help for the cleanup. We have a large Vietnamese fishing population in Louisiana. And what they're doing is having these guys that can't read or speak English sign these waivers when they sign up for the cleanup that nullifies any lawsuit towards BP. It's ridiculous. As if these guys don't have enough problems already.