On Saturday night, we headed to Washington Avenue to see what we could see at the annual Music Showcase. New intern Steve Hardy talked to some of the bands, the bartenders and any random attendees, all in the name of finding out who really deserves to be crowned one of St. Louis' top acts. After washing the beer and shaving cream out of his hair (more on that later) he transposed these notes from five hours at the Showcase.

8:10 There's a full house at Mosaic, but less than half a block away a crowd is gathered for a performance by Nato Caliph and others. The hip-hop stalwarts are bringing a crowd from all over downtown to the outdoor stage. There's an old lady leaning on a stoplight to watch, a kindergartener hanging on the fence, and a crowd at the bus stop getting down. An appeal to "spin your shirts around like a helicopter" goes unheeded. Maybe later tonight.

8:17 The Dock Ellis Band gets raucous laughter from Dubliner crowd with, "Condoms cost money, so we don't use those," sage advice for troubled economic times. Also, the band had a song about beating down a manatee with a 2X4.

8:29 Talked to folks in line to buy wristbands, am warned against Dubliner's chicken wings.

8:41 It's very easy to tell the regulars at the Over/Under Sports bar from the Exercise fans, most of whom look like they could use some. All of the skinny, mustachioed hipsters are entranced by the band's three-part vocal drone.

8:55 Performer Cassie Morgan's roommate won't give up any dirt on living with a showcase musician, but does tell me that if I'm lucky, I might get the chance to see her play, like, seventeen instruments -- all at once.

9:00 It's Beth Bombara, not Cassie Morgan, who plays tambourine, xylophone, glockenspiel and a wine glass at the same time, though.

9:09 Lure is cold! Like, physically cold. We need to get some bodies in here.

9:13 Hair of the Dog is crawling with Humanoids fans "because they're the best fucking band ever!" I am assured by a large handle-bar-mustache-sporting man in a skull T-shirt. The sentiment is echoed by a crowd of patrons by the bar who also give a nod to Bunnygrunt. They've never heard them, they've just got a good feeling.

9:22 Talked to Kyle and Joe of Jumbling Towers. There is much discussion of why St. Louis should vote for them. They eventually decide that they're the best because they'll "grow with the people." (Now, there's a slogan to put on a bass drum.) Other considerations as to why people should vote for JT: its fiscal policy and its swag. 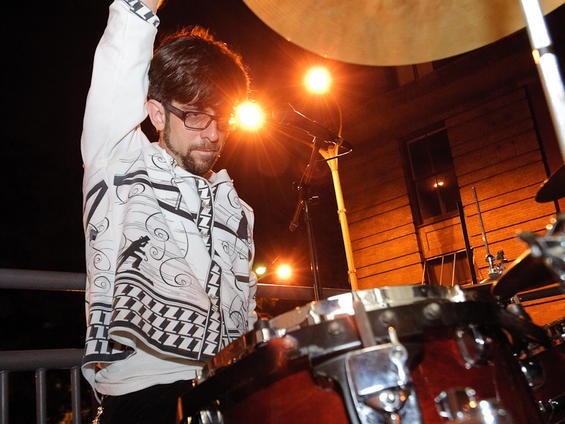 9:56 Mike the hotdog vendor tells me that just last month, a guy got stabbed ten feet from his cart. It was the last straw; he finally bought a videophone.

10:04 Jeff, the guy behind the soundboard at Rue 13, has high standards. He says he's still waiting to be impressed by the bands he's seen so far.

10:06 Rue 13 bartender Stefan tells me that Schlafly is his most popular beer order tonight. His tits are the most popular request, however. He flashes me, and I see the appeal.

10:09 Blind Eyes assure me that it's St. Louis' "most punctual, greatest, and most modest" band.

10:13 Jonathan at the gelato cart tells me about a photo shoot he saw earlier today. There were models, nice clothes, poses, the sunset -- all in the middle of the Washington Avenue.

10:19 Joe and Mabel of the band Spelling Bee pick Glass Teeth as their favorite act this year. Unfortunately, Glass Teeth isn't playing tonight because, as Joe says, it's louder than some of these venues can handle.

10:24 Much to her displeasure, one Side Bar bartender tells me that she's been slinging PBRs all night. The whole staff is busy -- from the waitress with the "jailbait" neck tattoo carrying empties to the one autographing a patron's neck. When asked why, she offers only, "He asked me to." Good enough.

10:32 Thoughtful Side Bar soundboard operator Mike says of all the great bands on the showcase, Troubador Dali gets his vote this year. Even if you don't like them, you can respect what they're doing, he tells me.

10:33 "This place smells like cloves!" a passerby yells aggressively. I can't tell if he means that as a good or a bad thing -- or, in the spirit of the place, he's just yelling in anticipation of the Humanoids.

10:39 Humanoids vocalist Tim - also answers to T-Piranha - previews his show for me in 3 words: raucous, rowdy and rambunctious. The drummer strips down to his boxers, boots and headband. 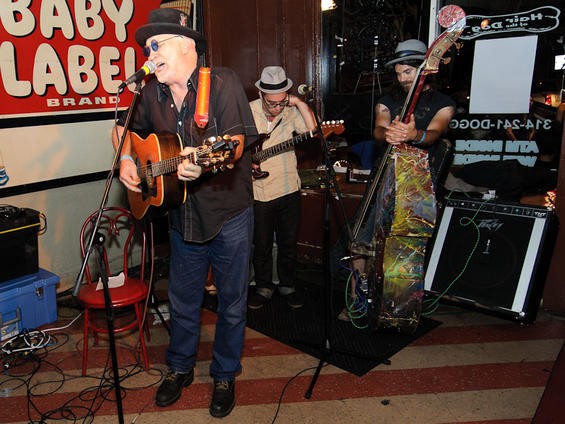 11:00 Add magnanimous to the list of Humanoids adjectives. It's invited metal band Cross Examination on stage because the band didn't have a showcase set of its own. Hmm, there are lots of trash bags full of balloons...

11:18 Just got out of the Humanoids/Cross Examination show. Those balloons were filled with shaving cream, turning the Side Bar into a moshing metal slip-n-slide. I am covered in every variety of cheap Midwestern beer and the toilet paper that sailed over the crowd for most of the show.

11:34 Cop tells me that there's been no trouble so far tonight, but I've never seen a man look so wary.

11:35 Why is there a Lamborghini driving down Washington at 5 m.p.h. with its suicide doors up?

11:49 The showcase bands are great, but the crowd is getting increasingly easier to please. A woman at the Dubliner just stifled a sneeze and the whole table applauded.

11:54 Anybody see Splice? Because I just saw a guy who could pass for whatever that thing was. Worth. The. Trip.

12:00 The later it gets, the funnier the "scoop the poop" bags on the sidewalk become to the revelers.

12:04 I see the sixth and seventh bachelorette parties of the night.

12:05 I'm pretending to write in my notes so I can watch the guy who got his neck signed accost a middle-aged woman outside of Rue 13, but he doesn't know what he wants.

12:15 Dogtown Allstars are jamming at Lola, and the crowd is digging the show. After being outside, the fans in here seem rather alcoholically responsible.