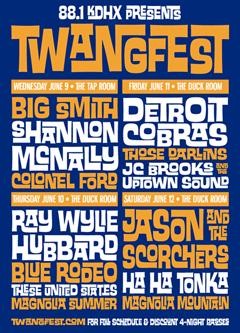 The annual celebration of twang alt-country rootsier-leaning music, Twangfest, takes place later this week. Three of the concerts are at Blueberry Hill's Duck Room, starting on Thursday; the show features a rare local appearance by Canadian rock band Blue Rodeo, as well as performances by road warriors These United States. Friday has a little bit of soul (JC Brooks & the Uptown Sound), some whiskey-fueled country-folk (Those Darlins) and a whole lotta rock sass (Detroit Cobras). Saturday night's show features a reconstituted Jason & the Scorchers, along with honorary local boys Ha Ha Tonka. And on Wednesday night at the Schlafly Tap Room, the festivities kick off with an appearance by chanteuse Shannon McNally and acoustic, hillbilly-folk act Big Smith. Tickets are still available for every night at $20 each.

Can't go to the shows, but want to help out Twangfest anyway? Buy stuff on eBay. Right now, they have a whopping 300 items for sale, including rare vinyl, signed vinyl, signed posters and more. I mean, a sealed vinyl copy of Son Volt's 1995 album, Trace, is already up to $99. (Holy smokes.) Find all of that stuff here.