Nightclubbing: Book 'Em, Danno's -- The Craft-Beer and Classic-Cocktail-Favoring Pub, That Is

Danno's American Pub is a bit off the beaten path, but it's a good reminder why venturing out of the city is a worthwhile exercise.

Danno's is exactly what you expect from a classic American pub. It has a casual atmosphere, comfy club chairs, Big Buck Hunter, a pool table and a kitschy '60s table game called Quick Poke that's like a hybrid of Boggle and poker. The place is relaxed and friendly, and facilitates anonymity -- something that's hard to come by in the big small town that is St. Louis city proper.

Though it's located in the Marlborough neighborhood, Danno's is only a few minutes away from South City; it's just a quick drive down Chippewa, about five minutes down the road from the Ted Drewes flagship. If you can drive to Ted Drewes, you can drive to Danno's.

"They hear Webster Groves and people think it's so far away, but I can be at The Royale in six, eight minutes, or at Upstairs Lounge in ten," says Chris Muether, whose family owns Danno's.

Muether, a local musician and one half of the noise-drone duo the Lonely Procession, can be found behind the bar six nights a week. The establishment has been in Muether's family since the '70s and reopened last July as Danno's. (It's named after Dan Muether, the bar's current owner and Chris' father.) Although once known as George's Route 66, the music venue Cruisin' Rte. 66 was the most recent occupant of the space.

The Muethers have kept the neighborhood feel of the bar, but have moved away from the Jack-and-Coke/Anheuser-Busch mentality of other bars in the area.

"There's a bigger audience now for craft beers and classic cocktails," Muether says. "Right now, I'm kind of in my infancy in my training as a bartender, and I've been taking a lot of pointers from people who have been in the game longer. I'm still finding my artistic voice behind the bar."

He lists Ted Kilgore of Taste by Niche as one mixologist in town he admires: "The guy's justs a phenom, just incredible." Muether recently played a show in New York City and also found inspiration at mixology meccas Angel's Share and Bourgeois Pig.

Muether has started infusing his own liquors, and is coming up with inventive cocktails with unconventional mixers such as Squirt and Drank, the violet-colored anti-energy drink. He served me a cocktail made with Drank and Three Olives RangTang; it tasted like a candy-colored muscle relaxer. He's got a handle on the classics as well, such as the Gypsy, a robust combination of Ketel One, Benedictine and orange angostura bitters which first premiered in 1935. (It was one of the first Prohibition-era cocktails to feature vodka instead of gin.)

Beer connoisseurs will love the rock-bottom prices at Danno's. Although most bars in the city charge upwards of $7 for Unibroue favorites such as La Fin Du Monde, it's only $5.50 at Danno's, and the bar's Stags and PBRs are $1.50. By the end of the summer, Danno's will add 50 draft beers and a craft beer cocktail list to the mix. There are few, if any bars in St. Louis that serve beer cocktails, though it's a trend that's caught on in larger cities. Muether hopes it will be a draw.

"I'm certainly not trying to corner the market," he says. "It's something I'd really like to see other bars doing in St. Louis."

Besides its popular Tuesday karaoke night, and its mixed-bag Wednesday DJ night, Danno's also offers live music. On weekends the bar hosts cover bands such as the Gimmicks and the Usual Suspects, although Muether hopes to start hosting original acts soon.

"I'm not going to start out with Skarekrau Radio," he says with a wry smile. The freak antics of Skarekrau Radio would likely weird out his regulars, so he's looking to book more palatable originals such as the Conformists or Spelling Bee.

On June 16, Danno's is having a unique event Muether is calling "Houston '96 Prom," where patrons can listen to hip-hop they would have heard at, er, a 1996 prom in Houston. Also in the works for Danno's is an entire menu revamp, outdoor seating, an outdoor smoker and highball specials that Muether dreams up daily.

"It's up and coming," Muether said. "It's always going to be getting better." 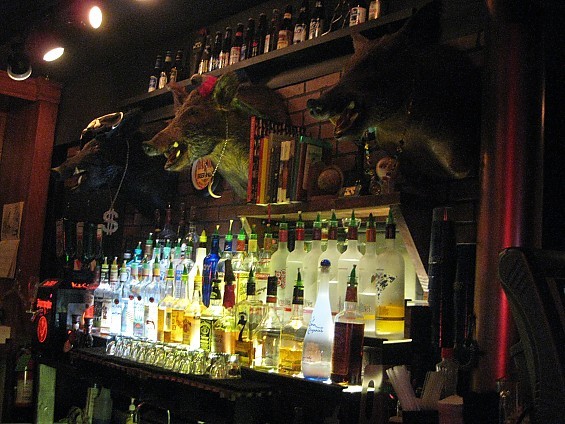 Got a lead on a new bar or club you'd like to see on A to Z? Or curious to hear more about an existing establishment? Email our Clubs Editor [email protected]