If you're looking for ear-splitting hardcore tonight, look no further than Fubar (3108 Locust Street) in Midtown when bands from California, Boston and Japan take the stage floor on the lounge side of the venue.

Mind Eraser, which has played St. Louis three times in the past (all in basements, here's a video), move above ground tonight at Fubar. Lyrically dark, fast metallic hardcore with a doomy metal tinge, Mind Eraser is also gloriously loud. The band's most recent work -- the two-song, 21-minute LP Conscious Unconscious -- is also its best. 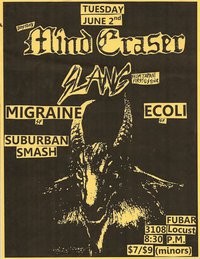 Japan's Slang seemingly take influences from every major Japanese hardcore band and every major New York hardcore band of the late '80s and early '90s. It's on a limited U.S. tour and, like Mind Eraser, it's coming here in the wake of a successful set at Chaos in Tejas, the crust/hardcore/punk/black metal clusterfuck in Austin that wrapped up Sunday.

Also on the bill are two Northern California bands -- Migraine (Concord) and Ecoli (San Francisco), which specialize in faster, thrashier, noisier hardcore punk than either Mind Eraser or Slang. Locals Suburban Smash round out the bill.

Read an interview with Ecoli in our sister paper SF Weekly.

Here are two MP3s for your downloading pleasure, and a YouTube video.