There were a lot of first-timers tuned in to America's Got Talent last night for the first part of its season premiere. Unfortunately, we never got what we came for. 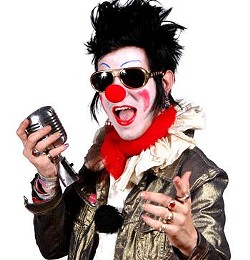 St. Louis, you sat through two hours of quasi-entertaining awkward moments and clearly staged emotional sob stories, and I'm sure Clownvis appreciates your support and solidarity.

The little bit we did see of St. Louis' favorite hip-shakin', lip-curlin', polyester-clad clown was an unbearable tease -- they showed just enough to imply that things wouldn't end well.

A promo piece aired a few minutes before the episode began, and within the fast flashes of freak shows, a shot of Piers Morgan mouthing off in his sassy little accent, "The sooner you leave this planet, the better." The shot then cut to a close-up of St. Louis' own Clownvis.

Who knows? Piers is the mean one. Maybe Sharon or Howie will salvage our hometown hero with their votes. Although, since Clownvis wasn't a large-breasted, scantily clad cat-woman lookalike, you probably shouldn't hold your breath.

Well, NBC, you win. We watched tonight, and we'll tune in tomorrow in hopes to watch Clownvis blow some minds. I've never so envied those with DVR.