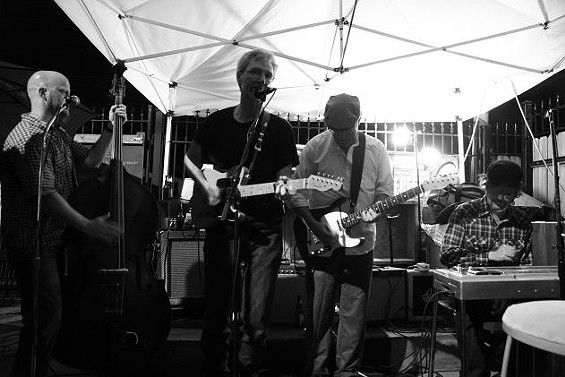 Dale Fisher sent the message on Twitter at 9:44 p.m. Saturday night: "Guess it's not a secret at this point. Jay Farrar playing w/ Colonel Ford trio on Iron Barley patio in 15 minutes. Sweet."

The band, a changing assortment of local musician which plays classic country, bluegrass and western swing, was actually a quartet during a few numbers. Saturday's set featured Gary Hunt on guitar and vocals, and three Farrar brothers - Jay on pedal steel, Dade on upright bass and vocals and jazz guitarist John -- on a few songs. The Buck Owens-heavy set included:

Moanin' the Blues I Can't Help it if I'm Still in Love with You Love's Gonna Live Here Heartaches by the Numbers Sitting on Top of the World Driving Nails in My Coffin (Please Don't Play) A-11 Dim Lights, Thick Smoke and Loud, Loud Music Act Naturally Streets of Bakersfield

Iron Barley has two videos on their Facebook page, one of "Heartaches by the Number" and one with John Farrar exhibiting some nifty guitar work.

Jay will play a solo show at the Old Rock House on June 17. John will be at Hammerstone's on June 2 and 9, and Fletcher's in Belleville on June 3. Dade will play the Maplewood Farmers' Market on June 23.

Colonel Ford plays the opening night of Twangfest on June 9 at the Schalfly Tap Room.