Recently, one of Glenn Danzig's biggest fans alerted us to a new single-issue comic produced by Microcosm Publishing: Henry & Glenn Forever. No description could explain the premise as well as the cover art does. 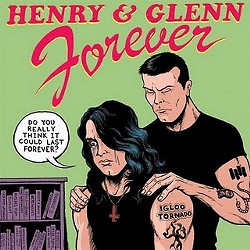 Your eyes do not deceive you: That's Henry Rollins and Glenn Danzig sharing an intimate moment.

While the content of the comic is anything but perfect -- the cover art is arguably the best part -- some of the individual panels are pretty great. And overall, the comic does make the two infamous tough guys into a pretty cute couple: They have a dog, they sing karaoke together, and they fight over politics and what color to paint the bedroom. ("Why does everything have to be black?") Additionally, the happy couple lives next door to Daryl Hall and John Oates, who also live in an ambiguous relationship, joined by their mutual Satanism.

Although I found this release to be entertaining and somewhat endearing (the more I think about it, the more I think Glenn and Henry would make a complementary, height-proportionate couple), I couldn't help but perceive it as a cheap shot. First, the joke's a little obvious. Second, comic books have been a part of Glenn Danzig's life since he began reading them as a kid. In the early '90s, he channeled his passion for violent and erotic comic books to create his own comic company, Verotik. He even sharply resembles iconic character Wolverine, so much so that he was even offered the part of Wolverine for the X-Men trilogy.

Besides all this, though: Danzig already gets more than his fair share of public ridicule. A YouTube search will provide dozens of videos, many of them painstakingly edited, whose aim is to tease Danzig. These clips encompass several genres, as noted below. *Some are simply original content with a mocking impersonator doing a lyrical voice-over:

*Some are elaborate mash-ups with ironic artists:

*Some are just poor Glenn getting punched in the face:

*The most captivating ones, though, are the videos that simply feature Danzig talking about what he knows best:

Despite all of this, he's obtained immense mainstream success for an artist of his genre, and generally, people seem to like him. Danzig (the band's) new album, Deth Red Sabaoth, is coming out June 22 and will surely be met with the success to which it's grown accustomed. Perhaps Henry & Glenn Forever will even help sales. After all, there's no such thing as bad press -- and Henry Rollins isn't a bad dude with which to get stuck in an imaginary homoerotic relationship.