An impressive quantity of local talent assembled in the Grove neighborhood this weekend to take part in the first-ever St. Louis Underground Music Festival. The lineup included more than 75 emcees, DJs and b-boys -- a roster so robust that performers may have outnumbered fans. The ambitious undertaking was well executed as far as organization and scheduling were concerned, and the venue offered plenty of space, food and liquor to accommodate the all-day affair. 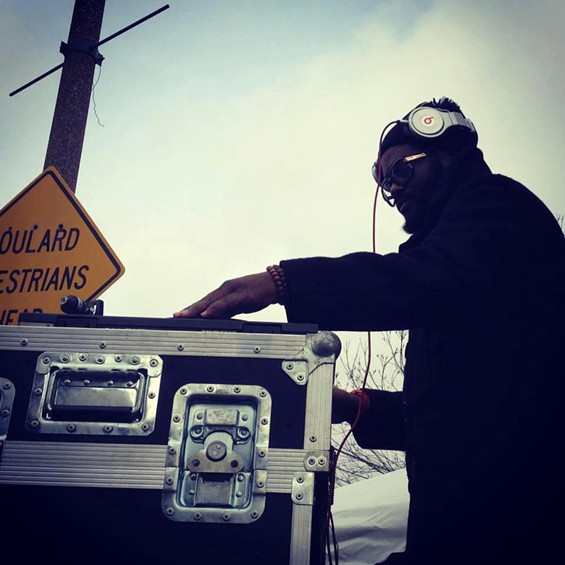 If you follow St. Louis hip-hop, your favorite emcees were most likely there. The Force was well represented (DJ Needles, Black Spade, Rockwell Knuckles, etc.), as were other crews such as the Frozen Foods Section. [Ed. note: Treez and 12 'til 6 Movement were there, but aren't in FFS.) A couple of standout moments featured different artists sharing the stage -- Corey Black and Tef Poe at one point, and County Brown, Ray Goss and Spark1duh? at another.

Up to three performances were under way simultaneously most of the time. The indoor lounge mainly featured DJs and b-boys; the Fox Hole functioned as the main stage; and yet another stage had been set up outdoors by the patio. Those who played outdoors were at a bit of a disadvantage on such a hot, humid day, but for the most part the crowd seemed oblivious to the heat. It didn't hurt that a graffiti wall had been set up outside, which everyone was encouraged to leave their mark on.

S.L.U.M. Fest delivered in terms of diversity -- an impressive number of hip-hop sub-genres were represented. The inclusion of freestyles, dance, live art and beat battles made it feel like a celebration of the culture as a whole, and will potentially appeal to a wider audience than music alone.

As rap concerts go, the crowd was mixed fairly equally. Frat boys, dope boys, backpackers and five-percenters all intermingled in the crowd, and the atmosphere was easygoing and chill. There were a lot of dreadlocks and baseball caps on the fellas, and a lot of the ladies were summer-ready in their skirts and sundresses. The majority of attendees were in their 20s and 30s (how many teenagers would be willing to go to a bar, when they can't drink?).

I wasn't able to stay late, but during the time I was there, everybody was partying and having a good time. Nite Owl, hosting on the mainstage, made it a point to keep the focus on supporting the scene.

The audience for this first-time event may have been on the small side, but S.L.U.M. certainly has the potential to grow into something much bigger. Imagine a St. Louis equivalent to Skribble Jam. The artists showed a tremendous amount of support (both for the event and for each other), and with proper marketing, more fans will follow suit.