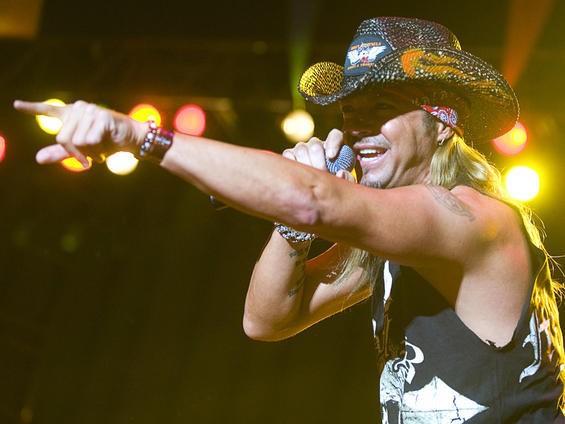 Mortality and rock & roll usually don't mix. The whole point of rock music, especially at the retro-heavy Rib America Festival at Soldiers' Memorial this weekend, is to be forever young. But there was an understandable whiff of carpe diem during Bret Michaels' set Saturday night. The former Poison front man had recently recovered from a subarachnoid hemorrhage in April, only to suffer a "warning stroke" on May 20. Say what you will about his music, but you have to tip your bandanna-lined cowboy hat to Michaels' dedication and showmanship in the face of potentially life-threatening illness. In a week during which fellow '80s icon Gary Coleman didn't escape a similar diagnosis, there was much to celebrate, for both Michaels and his fans.

Taking the stage to Guns N' Roses' "Welcome to the Jungle," Michaels and his band looked and sounded like the best bar band in the land; move them a few blocks east and they would have fit right in on Laclede's Landing. After telling the crowd that "tonight is a party and a celebration," the band wasted no time digging into the past. First up was the deathless karaoke staple "Talk Dirty to Me," which allowed for some communal fist-pumping and group-singing. Another early track, "Look What the Cat Dragged In," followed right behind.

Making sense of Michaels' current level of fame is tricky. After finding massive success with Poison in the '80s, he lived in a kind of hair-metal limbo until reality television gave him a second life. VH1's Rock of Love, in which starry-eyed vixens vie for the chance to engage in hot-tub canoodling with Michaels, will soon have its fourth season. (Ladies, get your leopard prints ready!) He recently won this season of Celebrity Apprentice and last night tried to spark a campaign to become a judge on American Idol. Part musician and part TV star, Michaels is now simply an entertainer.

Maybe that explains why the music felt secondary to the proliferation of Michaels' prime-time persona. Every song was an opportunity for cross promotion, either for his reality-TV empire, an upcoming tour or a new album. Such shilling is part of nearly every rock concert, but when it came from a guy who, in the course of the show, wore two different T-shirts with his name on them, last night was as much about pushing the brand and it was playing with the band. When Michaels did focus on the music, he showed much of the charm, charisma and talent that made him an icon. He strapped on an acoustic twelve-string guitar for "Something to Believe In," which he dedicated to the troops fighting overseas. It was his chance to get deep, though the endless codas and false endings made it drag on a bit too long.

Michaels was smart enough to not play too many new songs in front of a festival crowd (and one of the more recent songs, "Bittersweet," was a forgettable kiss-off in the style of his '80s hits). But padding the set with cover songs was a risk that did not exactly pay off, either. "Sweet Home Alabama" showed that his somewhat limited range doesn't always transfer to other material (though the song did give him a chance to pimp his upcoming tour with Lynyrd Skynyrd and .38 Special). Likewise, a white-boy blues version of Loggins & Messina's "Your Mama Don't Dance" -- which was also a hit for Poison -- fell flat. The death-obsessed "Knockin' on Heaven's Door" was better, owing in part to the gravitas that Michaels is now able to impart, and his version understandably owed more to Guns N' Roses' cover than to Bob Dylan's original. He even worked his bandanna-draped mic stand like a young Axl Rose.

In the end, though, it's easy to nitpick his weird brand of celebrity, but it's hard to deny how awesome and inscrutable "Unskinny Bop" is. And like it or not, "Every Rose Has Its Thorn" is one generation's "Stairway to Heaven." He wrote four or five songs that encapsulated the debauchery and regret of late-'80s LA, and that's all the credentials he needs to play a rib fest. By ending the set with "Nothin' But a Good Time," Michaels seemed to agree.