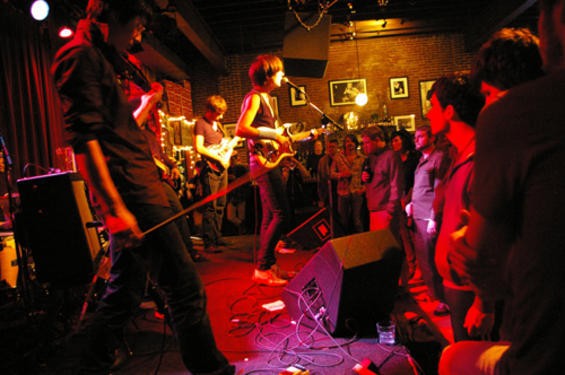 The last time Islands played in St. Louis, at Off Broadway in March 2008, the Canadian kaleidoscopic pop-weirdos "showcased their diverse influences and tastes," said Keegan Hamilton. From that review:

The set opened with a handful of new, unreleased songs from their forthcoming album The Arm's Way (due out in May.) These were a cross between Van Halen and Johann Sebastian Bach -- classical time changes that retained their rollicking rock/pop melodies. On their 2006 album Return to Sea, the song "Where There's a Will There's a Whalebone," features an extended hip-hop verse, but last night, given the absence of contributing MC Subtitle, the song was rendered as straight-up rock & roll thanks the employment of a booming baritone sax.

Since Way, Islands has released another album, 2009's Vapours. Get caught up on the band's catalog on Friday, July 9, at the Firebird. Tickets are $12.

As for Dan Mangan:

Well, a friend of mine started freaking out after hearing that Canadian singer-songwriter Dan Mangan is playing at the Old Rock House on August 22, opening for the Wooden Birds. (The latter band is a project of Andrew Kenny of the American Analog Set, and also features Matt Pond.) Mangan is a smart singer-songwriter who's been compared to Badly Drawn Boy, Bon Iver and Damien Rice. 2009's Nice, Nice, Very Nice is his latest LP. Here's a song from it called "Robots" -- and an article about the genesis of the song.