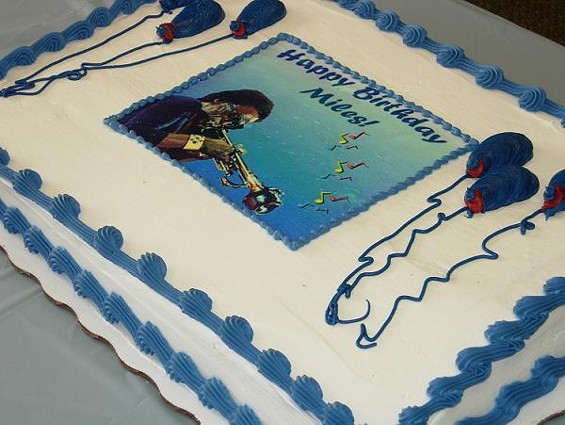 Earlier this afternoon, East St. Louis Mayor Alvin L. Parks threw a party to commemorate the 84th birthday of Miles Dewey Davis III, known to most as Miles Davis. The event, which took place in Parks' office, honored the jazz legend and paid tribute to the role the city played during his formative years. Davis was born in Alton but grew up in East St. Louis, where he attended Lincoln High School and played in its band. Some of Davis' classmates, as well as several generations of East St. Louis citizens, attended the gathering.

Standing before a sheet cake emblazoned with a picture of Bitches Brew-era Miles, Parks welcomed the crowd and commented on the legacy left by Davis, who died in 1991. "Though he is no longer with us in person, we certainly know that his spirit lives with us," Parks said. "One of the reasons that East St. Louis is so strongly known for music is that Miles Davis hails from East St. Louis, Illinois.

A three-piece jazz combo, led by Southern Illinois University-Edwardsville faculty member Reggie Thomas, played a selection of Davis' better-known tunes, starting with the Kind of Blue classic "Freddie Freeloader." Trumpeter Brady Lewis, a sophomore at East St. Louis Senior High School, was tasked with taking Miles' role and did a fine job; he even faithfully recreated the original trumpet solo. Lewis and his classmate, bassist Marvin Cooper, are getting used to the spotlight: Their school jazz combo just returned from a trip to the Monterey Jazz Festival's Next Generation Festival in California, further evidence that East St. Louis' jazz heritage extends well beyond the city limits. 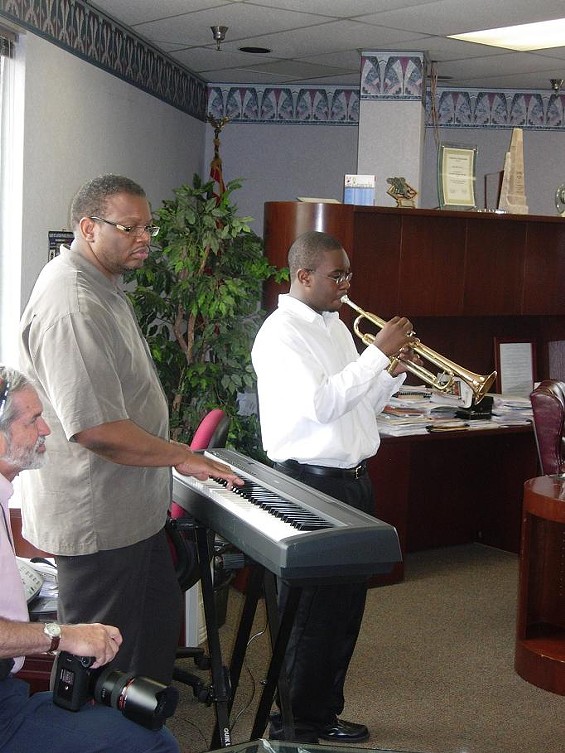 The band then played a muted version of "All Blues" as East St. Louis' poet laureate, Dr. Eugene B. Redmond, read the prologue to his poem, "Milestone: The Birth of an Ancestor," which he had written after Davis' death and read at a memorial service at Lincoln High. Before reading the poem, he related a story of hearing of Davis' death while shopping in the Delmar Loop. Instinctively, Redmond sought out Davis' star on the St. Louis Walk of Fame and paid tribute with a group of European tourists, who had likewise sought out the trumpeter's star. Redmond's poem ruminated on the impact of Davis' artistry and the legacy he left behind, ending with the coda, "The death of the cool became the birth of an ancestor." But in Redmond's reading, the last syllable of "ancestor" sounded like "star," a fitting pronunciation and pronouncement for a musician whose star shone throughout the world, but began its ascent in East St. Louis.

Davis' nephew, Vince Wilburn Jr., telephoned from California to thank Mayor Parks and the guests for honoring his uncle's legacy. It was Wilburn's idea to hold the celebration in the mayor's office, and he remains proud of East St. Louis' role in Davis' history. In a separate phone conversation with the RFT after the event, Wilburn reiterated the importance of the city to Davis' legacy: "He was born in Alton and grew up in East St. Louis. That's why it's so important for people to know [Davis' history]."

Wilburn, who helps manage the Miles Davis estate with Davis' son Erin and daughter Cheryl, also mentioned an upcoming biographical film, to feature Don Cheadle in both the starring role and in the director's chair. While details (such as a finalized version of the script) are still being hammered out, Wilburn said that former Davis sideman and fellow jazz legend Herbie Hancock would be providing the film score.