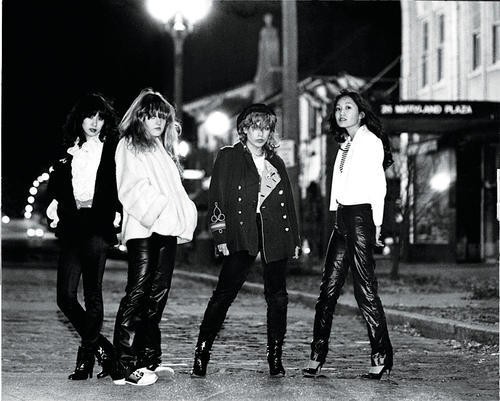 In the current issue of the dead-tree RFT, writer Mike Appelstein constructed an oral history of early St. Louis punk band the Welders. The quartet briefly got back together in December to play the reunion show of post-punks Raymilland (who we featured back in December), while BDR Records will release a collection of unheard songs later this summer. Read on below for some outtakes from the interviews, where the Welders discuss that reunion show, their musical bond with Raymilland and seeing R.E.M.'s Michael Stipe play in an early band. Plus, check out an MP3, courtesy of BDR Records' Jason Rerun and Matt Harnish!

MP3: The Welders, "Debutantes in Bondage"

On the reunion... Jane Fujimoto (drums/keyboards): I loved playing with the Welders again, particularly to such an appreciative crowd. It was very fulfilling. I think I achieved self-actualization. Stephanie Von Drasek (vocals): It was fabulous! Most fun I've had in ages. Since it was a one-time event, it was easy for me to just have fun. Caroline Fujimoto (bass): It wasn't anything I ever imagined I would do or wanted to do ever again, but it ended up being a positive experience. Once we started practicing, I was surprised at how fast it came back to us.

Kelly "Rusty" Draper (guitar): It was absolutely terrifying. Caroline and I had to start from square one and learn how to play again and relearn our songs. Initially we were pretty doubtful we could pull it off. Matt Harnish (BDR Records): The release show made my brain explode. I could not stop smiling the entire night.

On their relationship with Raymilland... JF: Raymilland were and still are our some of our best friends. They turned out to be the funniest, most sarcastic guys ever. SVD: I think we were like pesky little sisters. Steve Scariano: A lot of great lifelong friendships were formed between a lot of us who hung out there. The Welders were always there too, and they were always kind of the center of the party. CF: I remember seeing Michael Stipe sing the Cheap Trick song "He's a Whore" with his band, Bad Habits, at some party. He was always really nice and asked us to play a gig with his band, but it never came to be.

MH: A year or so after they recorded for the first time, Greg from Raymilland tracked some stuff with them. They have a song called "The Earth Dies Screaming" that is flat-out amazing. It sounds straight out of the Paisley Underground, but predates that scene by a few years. JF: We were growing up and we were trying to make some serious music. I had switched over to keyboards from drums. I was playing a Farfisa and a Vox Super Continental organ through flangers and stuff. We were into Ultravox, Kraftwerk and Gary Numan. I think I was trying to channel Kate Bush on that song. CF: I must confess that I had borrowed a bass part from a Monkees song. The Monkees were pretty psychedelic.