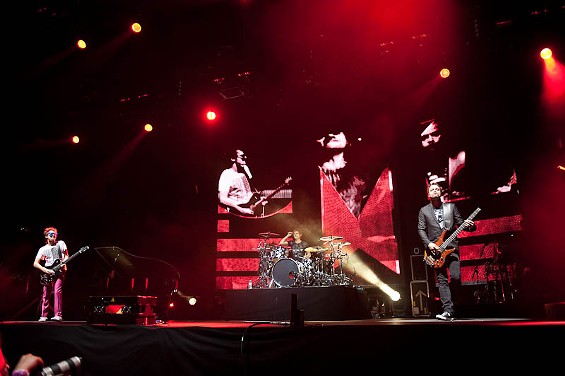 Here's a bummer email to wake up to: Muse has re-routed its fall 2010 tour due to the fact that "bassist Chris Wolstenholme is expecting a child with wife Kelly in November of 2010," according to a press release. It goes on to say:

As a result, the following tour dates have changed: The November 2nd show in Kansas City, MO, and the November 3rd show in St. Louis, MO, will be cancelled with ticket refunds at point of purchase. The November 5th show in Columbus, OH, will be moved up to October 12th and the November 6th show in Cincinnati moved up to October 11th. Tickets held for the original dates will be honored for the new dates. Internet and phone orders will be automatically credited; outlets and box office sales need to return to point of purchase for a refund. Muse wants everyone to know that they have not forgotten the fans in Kansas City and St. Louis and fully intend to make up the cancelled shows on a future tour.

Congrats to Chris and Kelly!