Recap: "The State of the Music Scene" Discussion at the Luminary Center for the Arts 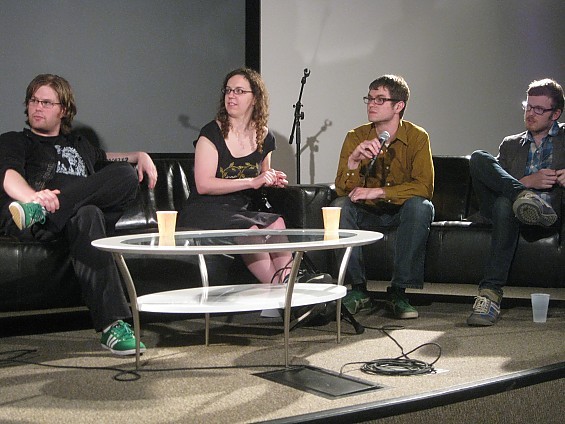 Some admitted music nerds talked shop, St. Louis and "the scene" last Thursday at The Luminary Center for the Arts.

The panel consisted of Mike Cracchiolo, talent buyer at The Firebird, Annie Zaleski, music editor of the Riverfront Times (you may have heard of it), Matt Strom, co-founder of Eleven magazine, and Ryan Wasoba, founding member of So Many Dynamos and owner of Bird Cloud Recordings. Luminary owners James and Brea McAnally presided over the proceedings.

The panel addressed the gamut of issues facing St. Louis musicians and fans: how to get press and how not to burn out your fan base, to the negative paradigm and pervasive inferiority complex that's holding us back from being a major player such as Austin or Atlanta.

Here are some of the conclusions reached by the panel:

*There is no St. Louis music "scene" per se -- "scene" is a term applied after the fact to express something that may or may not have been there in the first place. It was the general opinion among the panelists that "scene" is a misnomer in most cases, because the term is applied by outsiders and generally does not reflect the reality of the actual music community. Wasoba defined a scene as a collection of people who aren't imposing limits on themselves and who take responsibility for their work. Notable scenes mentioned were Britain in the '90s, all-ages venue the Smell in Los Angeles, and Brooklyn right now.

*St. Louis is going through a creative renaissance. Everyone agreed that there's been incredible, laudable progress across the board as far as live music goes, with sold out shows, new venues opening up and killer bands playing nightly.

*St. Louis doesn't have record labels, at least, not in the sense that Seattle and L.A. have labels.

*McAnally asked about the historical precedent of a lack of business/promotion/label infrastructure available to local bands, which in other cities is used to explain the music industry "game." The panel agreed that this is a crucial element missing, and one of the big things that separates us from New York and L.A. Unlike larger cities, St. Louis doesn't have an infrastructure in place for bands, nor do we have established acts on whose coattails younger bands can ride. "Ultimately, there's really nobody there to say, "This is how you do it," which I think is something bigger cities have." said Cracchiolo.

*Unlike other cities, St. Louis is a weeknight destination.

*Bands should get off their asses and take responsibility for themselves. If your show sucked canal water, don't blame the venue or the media. Promote your band.

*Venues and the media want to hear what you have to say. They may not honor every request, but they genuinely want to know what you're into. Cracchiolo mentioned a fan who approached him about booking the Ataris to fill a hole in their schedule, so he booked the show and it ended up being a smash.

*Media coverage does not guarantee that people will come out to your show, so you have to promote it yourself too. Zaleski said people have a misconception about the sway the media has over the public. "We can not cover things at the Pageant or at Off Broadway or The Firebird, and the show will sell out. And we can cover things and no one will show up."

*St. Louis is full of negative Nancies who would rather comfortably complain about the Live on the Levee line-up or the title of LouFest than be proactive about putting in requests for what they do want to see.

*On the subject of how bands can do better, Cracchiolo's advice was simple: use common sense, don't play bad shows with shitty bands, and do not, do not oversaturate your market. "Be good at what you do, and work hard, and don't be stupid, it's really simple principles," he said. "It's more of a crapshoot that it's ever been. What's the point in being in a band? There are hundreds of thousands of bands out there. You don't saturate your market. You don't burn out the 25 friends that always show up to your shows by playing every two weeks for six months until they don't show up anymore."

*Bad shows: Strom says play them, Cracchiolo says avoid them like the plague; "The more bad shows people see, the less they're going to want to go out. The more good shows they see, the more excited they get about going out. I see people that come to shows at our venue randomly because they thought it looked interesting to them. Now, if the last nine shows they saw at my venue ate shit, nothing on our schedule will look interesting to them." 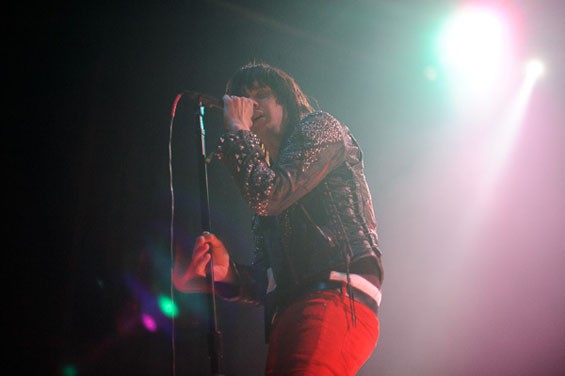 *Laziness is one of the major issues facing St. Louis today, Wasoba said . "Creative laziness, promotional laziness...it all comes down to laziness compiled upon itself. If a band is over-saturating themselves, playing too much and there's only 15 people there, the only people who aren't being lazy are those 15 people. I think it's harder to leave your house and go to a show than it is to play a show."

*St. Louis is an easy city to live in, and that might be one of the major issues stifling creativity and collaboration. Low rent and a lack of historical precedent means artists have the freedom to innovate, whereas in larger cities, competition and expense drives people to work harder. "It's really easy to be in a band here, you can get shows here pretty easily, you can live cheaply and you can record cheaply," McAnally said. "I don't think that's credited enough, you have that margin to do something interesting."

*It's a fallacy to say that St. Louis isn't a great place to play. McAnally said he asks all the artists who come through his venue what they think of playing in St. Louis. "Traditionally, it's surprisingly better here than most any other city, including Omaha, which is a comparable size...In some cases, they do better here than the sort of in A-markets." Zaleski cited the recent Julian Casablancas show, which drew about 500 people on a Monday night and totally trumped the turnout in Kansas City and Columbia.

*There's been a sea change in recent years, and St. Louis is being overlooked less and less by major acts. Zaleski said tour routing has more to do with St. Louis being overlooked than anything. "When people complain about bands not coming to St. Louis, a lot of it has to do with drive distances," she said. "For instance, you can go from Denver to Kansas City in a day, but Denver to St. Louis in a day is a stretch, so if you're on your way to Chicago, it makes more sense to do Denver, Kansas City, Chicago. If people want to come to St. Louis, they have to make a special trip here."

*Jazz and bluegrass, the genres on which the city's musical history was built, still have a future in River City. "If you look at the schedule for a place like Jazz at the Bistro, when they book something, they book it five nights in a row," Wasoba said. "If people didn't care, then they wouldn't be able to justify having John Patitucci playing bass five nights in a row, two sets a night."

The panelists all had their own opinions about what is the best thing St. Louis has going for it right now: Strom: "Something that's inherently difficult about music scenes and creative scenes, and large groups of people doing things, that are exciting and also economically viable is that artists aren't business people. It's almost mutually exclusive, being an artist and knowing how to make a lot of money. Something that's really exciting in St. Louis there's enough people that are artists who are civic- and business-minded. A lot of these artists who know how to get a grant and know how to put on a show that makes money, they know how to sell their CD, they know you have to sell your CD instead of giving it away. There are more and more people all the time that actually take it seriously, and they don't put up that stupid facade of art for art's sake." Art for art's sake, Strom continued, is pointless if it's turning people off.

Wasoba: "I think the most exciting thing happening in St. Louis right now -- weekdays. From the perspective of being in a band, every single time we played a bad show, someone said, 'Oh, you should have been here on a Friday'...We're a weeknight destination...That, I think, is rarer than people realize."

Zaleski: "I think the excitement of going out to see live music in general, in the past couple years it's definitely increased. people seem more willing to go out and see live music and spend money, it makes for a better experience."

Cracchiolo: "If you had asked me this in 2007, hands-down, I would say I was most excited about the bands, because at that time, I thought the local bands here were really just killing it. They worked really hard, there was a lot of talent, but more than anything, there was a lot of drive and enthusiasm. We had a dry spell for a couple of years, we're seeing that come back now.

"This time, I feel like the vital energy of St. Louis, as far as having nightlife, is now the purview of the promoters, the bookers, the DJs," he continued. "I can't remember a time when there were this many cool things happening in St. Louis and thriving in St. Louis, and it's really because there's a demand for it, people want to go out and see these things, they want to see things in cool spaces, they want to see bands that haven't been here for eight years because the Creepy Crawl burned them the last time they were in town.

"Now, there's a completely new crowd of people going out and making that stuff happen. There's an incredible, incredible selection of things to do on any given night."