(Warning: If you haven't seen Conan's show yet and will over the next few days, this review might contain spoilers. Read at your own risk.) 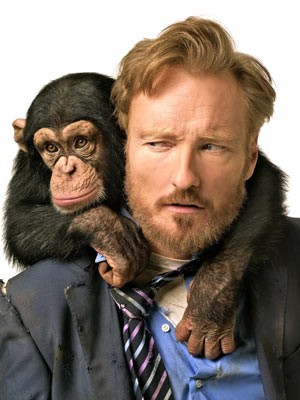 What could fans expect from Conan O'Brien's "Legally Prohibited from Being Funny on Television" tour? For legal reasons, not jabs at his former employer, NBC, that's for certain. But beyond that, the entertaining, funny 90-minute live show dreamed up by the ex-Tonight Show host had the air of "anything goes."

And indeed, "anything goes" summed up the fantastic performance, which was part-concert, part-comedy revue, part-nostalgia trip. The night opened with two stellar numbers from the Legally Prohibited Band (O'Brien's long-time TV band, save for drummer Max Weinberg). LaBamba - the trombonist often singled out for comedy gags - belted out his tune with surprising gusto and a booming singing voice, while KC native Mark Pender showed off some unbelievable circular breathing with a minutes-long trumpet solo.

And then after a playful digital short poking fun at his post-NBC ennui, Conan - let's just call him by his first name - bounded onstage to a standing ovation. He did an opening comedy monologue that touched on the city and his career arc (and career pause) but no topical events. This kept the tone light, which was a smart move.

In fact, any veiled references to his troubles were couched in exaggerated humor. A hilarious digital short featured a nefarious network executive stroking a stuffed cat; afterward, Conan took care to point out that this represented nobody in particular. And after thanking the audience for coming, he noted that it's the "first time people have paid to see me." He then slapped the ground and mentioned something about others who have "paid to make me go away." Naturally, the obvious comedy gag went over well.

Beloved remnants of Conan's TV shows were also crowd-pleasing. Andy Richter showed up to add comic relief and be Conan's sidekick once again. The masturbating bear was rechristened the "self-pleasuring panda" with the addition of a furry animal head covering. Triumph the Insult Comic Dog appeared via video and drew some of the biggest laughs of the night; he astutely nailed the crowd demographic and said that "usually you have to go to a Dave Matthews Band concert to see so many white people." As if these cameos weren't enough: SNL cast member (and KC native) Jason Sudeikis made a surprise appearance. Wearing a Record Bar shirt and drinking a Natty Light, the guest pulled the handle for one of many ridiculous Walker, Texas Ranger episode clips Conan and Andy mocked.

Conan came off as pretty much like he did on television: self-deprecating, goofy, getting laughs at his own expense. He sported a beard - a polarizing gesture, he said, noting that someone said he looked like "Paul Bunyan with an eating disorder" - and a plain charcoal suit that showed off his impossibly long legs. His awkward legginess was a recurring gag; he mentioned that his wife asked him not to wear shorts on the tour, and compared them to "ivory Slim Jims." Later, he sported a lavender patterned suit with black accents he said Eddie Murphy wore in the '80s; he was sure to point out that it made his ass "so flat you could iron on it." Later still, he strapped on a guitar to sing a modified version of "I Will Survive" (inspired by Cake, not Donna Summer Gloria Gaynor, Conan pointed out) and a rousing rockabilly number in the encore.

The smooth-running show was obviously well-rehearsed, but it was well-researched: Its comedy gags contained plenty of local references to Kansas City institutions - from gentleman's club the Shady Lady to the football Chiefs to the gigantic, head-scratching shuttlecock statues at the Nelson-Atkins Museum of Art (quipped Conan, "It looked like gay giants were here"). "What is wrong with you people?" he exclaimed earlier, after noting the abundance of barbecued meat - a KC specialty -- delivered by catering. This local color, of course, won over the crowd - not that the sold-out audience, which screamed and cheered from minute one, needed the encouragement.

And yet Conan appeared very relaxed and loose, confident but not cocky. His penchant for almost-mumbled asides was thankfully intact ("I'm used to throwing the show to commercial. After I had sex with my wife, I did that. Carson Daly showed up"). At another point, he devolved into a Massachusetts accent and snickered, "I don't know what Kennedy I'm imitating; maybe it's Mayor Quimby," a reference to his history as a writer on The Simpsons. When they were on stage together, he and Andy Richter cracked each other up with jokes as if nobody else was in the room - like they were just two dudes throwing back some beers and making each other laugh.

Above all, the night hammered home that Conan's everyman personality is what makes him lovable. He came off as just a regular (albeit really funny) dude, who never takes himself too seriously, and isn't at all superior to his fans. If anything, the dispute between him and NBC just made him all the more relatable. After all, Conan got screwed over by authority, for reasons that were out of his control and had nothing to do with his skills, talents or work ethic - and who can't relate to that?