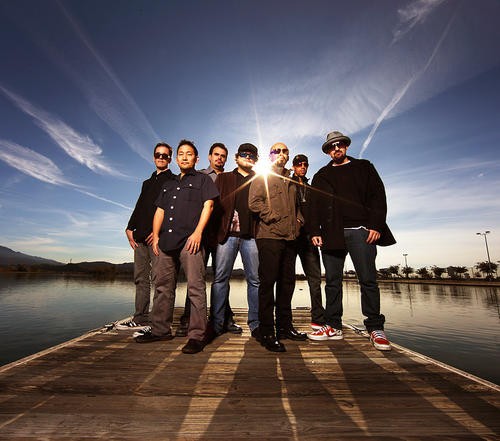 Whatever disappointment St. Louis Ozomatli fans felt when the group's concert with the St. Louis Symphony became a regular show was erased by last night's dynamic performance. Yes, it would have been interesting and potentially thrilling to see the Los Angeles latin/funk/hip-hop/reggae/you-name-it band get the orchestral treatment. But when most of the packed Duck Room's crowd exploded into dancing, it was hard to imagine how the Ozomatli experience would have been better served by Powell Hall.

With "Dos Cosas Ciertas," Ozomatli started with a bang and kept the energy level high throughout its hour and twenty-minute set. The seven-piece band showcased its mastery of various Latin, rock and funk styles while exhibiting the tight and playful chemistry they've honed over their 15-year career. Drawing mostly from their last two albums, this year's Fire Away and 2007's Don't Mess with the Dragon, the group threw guitar, ukulele, a trumpet, sax clarinet, keyboards, rapping and singing into the mix at various times yet never sounded cluttered. Even during the many solos (I think each member got at least one), Ozomatli kept their focus on the groove and never got bogged down in aimless jamming. The band furthered the party vibe with frequent shout outs to the crowd, calls and responses and personable banter amongst themselves and with the audience.

Ozomatli sounded great on straightforward run-throughs of their material - particularly so on "Malagasy Shock" and "City of Angels" - but took their show to a new level when they threw a few curveballs in their set. "Cumbia de los Muertes" transitioned seamlessly from its rap bridge to a cover of Musical Youth's "Pass the Dutchie" that kicked off a medley of cover songs that even included a snatch of Metallica's "Master of Puppets" before bringing it back to Cumbia's outro. It would have been the highlight of the show if not for the fantastic dueling solos at the end of next song "Ya Viene El Sol" between Ulises Bella's ukulele and Jiro Yamaguchi's hand drum. The applause was deafening.

Only rarely did Ozomatli stumble. Percussionist/rapper Justin "El Niño" Porée couldn't make the show and was replaced with Tre Hardson of the Pharcyde. Although Hardson came off great when rapping his own lyrics, he lost his place a few times on Porée's verse on "Saturday Night." Considering the force of the rest of the show however, this was easy to overlook.

Ozomatli closed its show the usual way by bringing drums and horns to the floor to keep the rhythm and energy alive. It's the type of gimmick that seems like it would get old after so many shows, but it never does. Ozomatli's enthusiasm is too contagious for you to not get caught up in the fervor. The crowd at the Duck Room couldn't avoid it - even as the house music started to fade in, many were still chanting for more.