Ozomatli, in a rare still moment.

Tonight at the Duck Room, the Los Angeles-based multicultural, international, trans-everything act Ozomatli will do their thing for a grown-up audience. But they were also up bright and early this morning in their guise as music educators to play at several area schools. And the first stop on this mini-tour couldn't be more appropriate: St. Louis Language Immersion Schools, a charter school where kids from a variety of backgrounds learn in Spanish or French all day long. As you can see in the following photos and videos, the kids were ready to rock...

Since my daughter attends the Spanish school at SLLIS, I was privileged to gain entree to this exclusive gig. It started like any other school assembly: the kids, natty in their blazers and ties, filed into the auditorium and took their seats. But no sooner had the teachers settled them down than Ozomatli riled them right back up again with a propulsive, merengue-flavored opening number. 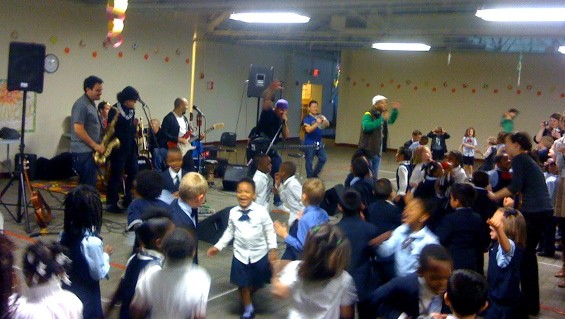 The pandemonium on the dance floor was typical for an Ozomatli show, except that the dancers were all half the height of the band. Excuse the crappy pics: I'm no photographer, my camera's lousy, the lighting in the auditorium wasn't like your typical show venue, and those kids were crazy. If it looks like a blur in the pictures, it was kind of a blur in real life, too.

Spontaneous conga-line outbreaks were reported throughout the auditorium.

Musicians aren't typically awake at 9:30 AM, much less rocking out for a bunch of screaming kids. Ozomatli handled it like the veteran music-appreciation teachers they are (they've run numerous workshops and played countless schools around the world). They threw some St. Louis shout-outs into their crunchy guitar-funk hymn to their hometown, "City of Angels." They exhorted the kids to dance like chickens with the loping cumbia "La Gallina." They took questions from the kids (best one: "How many teeth have you lost?"). And even though the instruments were already put away, when the kids chanted the primary-school equivalent of "encore" - "Play another song! Play another song!" - they gathered around the mics for an a capella singalong en Español.

My daughter's language immersion experience has been enormously rewarding: she's learned more Spanish in kindergarten than I did in six years of Spanish classes. But rarely has it been such uproarious fun. If the adults at the Duck Room enjoy themselves half as much as the kids of SLLIS, it'll be the show of the year.