Show Review + Setlist: The Apples In Stereo Time Travel to the Billiken Club, Tuesday, May 4 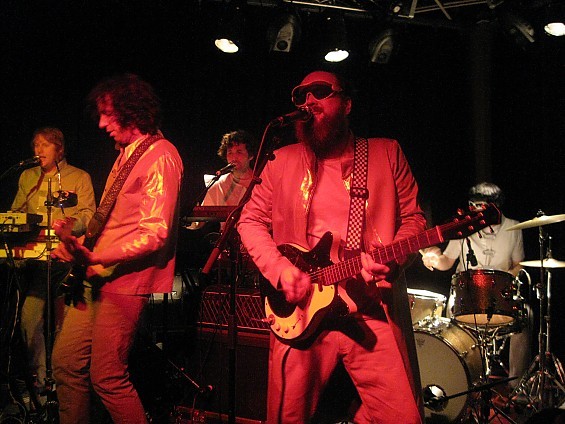 The Apples in Stereo have been around since the early '90s. It's one of the founding bands of the Elephant 6 Collective (others include Of Montreal, Olivia Tremor Control and Neutral Milk Hotel). A testament to their sustainability and appeal: Last night, it drew a crowd that spanned from those who came of age in the '90s to those who were born in the '90s.

As the joke went last night, however, the band was from a slightly different time. "We've come from the future," quipped Apples in Stereo front man Robert Schneider. "When are we? 2010, once again. Did everyone arrive okay?"

The band played an outstanding set to an enthusiastic crowd at the Billiken Club, that odd little cafeteria/venue that treats our fair city to free shows regularly -- and really, really good ones on occasion. This was one of those really good shows.

After a somewhat tedious soundcheck, Generationals took the stage. It was the last night of the tour, and it showed; the band looked strung out, exhausted, and maybe a little depressed, although gratified all the same. Still, the New Orleans band delivered a solid, super-fun set nonetheless.

If the Apples are from the future, Generationals are purely of the here and now. It has a firm grip on the sunshine pop of the past, but this genre is funneled through familiar late-'00s indie rock conceits. The music's almost lo-fi (but not really) and features electro vamping and genre-bending influences. In short, the band has a talent for making bubblegummy pop that doesn't suck.

They opened the set with "Exterior Street Day," followed by the rousing clap-a-long "Nobody Could Change Your Mind." Schneider snuck into the crowd in the middle of Generationals set, much to the delight of a few Apples diehards near the stage. He then joined the band on stage and assisted on the tambourine during the highly danceable "When They Fight, They Fight." He said "I love that song!" before leaving the Generationals to finish their set. "If anyone has video of that, send it along," Generationals' Widmer said. The Apples came out dressed in pseudo space garb designed by Rebecca Taylor, and Schneider kept up the time travel shtick throughout the show, which the audience ate up. "It's a blast to travel back in time, even if it seems like you're only travelling sequentially forward."

They launched into "Hey Elevator," off its 2010 release, the aptly titled Travellers In Space and Time. Their new material is like ELO for this generation, vocoder-heavy space disco for a geeked out brave new world. The crowd bopped and danced along to "Dignified Dignitary," "Go!" and the commercially successful, Pepsi-approved "Energy." The older material was noticeably less disco and more pop-rock, but the crowd enjoyed "Dancefloor" and "No One in The World" as much as they did the classics such as "Tidal Wave," which was the first song they wrote and recorded as a band.

Schneider was adorably endearing with his time travel babble and genuine appreciation for the audience. After almost every song, he thanked the crowd: "Awesome, cool, thanks a lot!" or "Cool, thanks!"

The only song that didn't deliver was "Next Year," a new cut that features Bill Doss on vocals instead of Schneider, but the band followed it with the delightful "No One In the World," which made up for the previous song's shortcomings.

The Apples invited Generationals and openers Laminated Cat on stage to contribute vocals and tambourine for the encore of "Ruby." Bassist Eric Allen walked into the crowd to jam out while the everyone else had a blast on stage. Widmer of Generationals took the opportunity to capture moment, snapping pictures of the crowd on his digital camera.

While the show was awesome, the best part of the whole night was the infectious energy of the band; I've never seen a band look so genuinely happy to be on stage. Usually they're trying to look coolly unaffected or are too blazed to look like much of anything. But the Apples enjoyed themselves nonstop, and it was impossible for the crowd not to do the same.

In the words of Robert Schneider, "Happy future, everybody."

Show note: It was the last show of the tour, and both the Apples and Generationals had nothing but positive things to say about each other. Grant Widmer of Generationals said the Apples are "the coolest band, but they're also the nicest guys. It's weird when you have a hero that becomes your friend, I hope that happens for all of you someday." Schneider also commented on the end of the tour: "It's like the last day of camp...They're excellent groups of individuals, not to mention awesome fucking bands."