Review + Photos + Setlist: Pearl Jam and Band of Horses at the Scottrade Center, Tuesday, May 4

After Pearl Jam opened its first St. Louis show since 2004 with the moody No Code album cut "Sometimes," vocalist Eddie Vedder bellowed, "In the immortal words of Marvin Gaye - let's get it on!" Cue "Corduroy," just one of many snarled rockers the quintet unleashed during a two-hour-plus set. 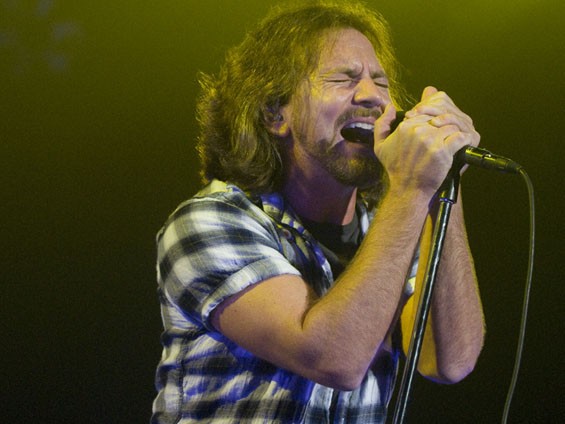 Generally, Pearl Jam keeps fans guessing as to what exactly it's going to play on a given night. That held true at the Scottrade Center: The band played just four songs from last year's Backspacer, and dusted off a few mega-rarities. The thrashing "All Night," from the Lost Dogs odds 'n sods collection, was played for the thirteenth time ever, while the Jeff Ament-penned "Pilate" made its seventeenth appearance. Such fluid song selection makes for a looser concert experience for sure - and no doubt keeps the members of Pearl Jam on their toes. 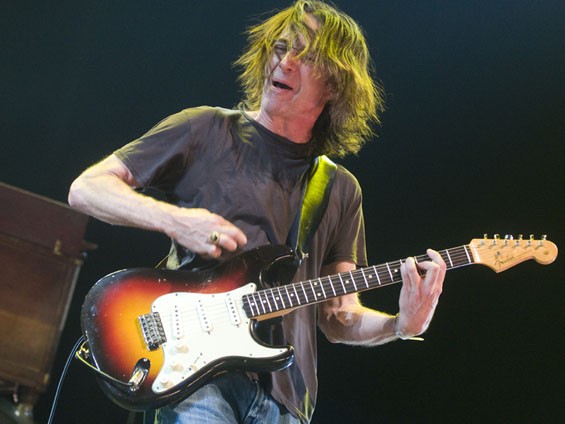 But twenty-some years into its career, the members of Pearl Jam have well-defined roles. Guitarist Stone Gossard, with chin-length hair obscuring his face, played the role of meticulous mad scientist at stage left; he seemed lost in his own little world as he concentrated on his parts. Chiseled guitarist Mike McCready and square-jawed bassist Ament buzzed back and forth around each other at stage right - the former a flashy soloist, the latter a muscular sparkplug constantly in motion.

Matt Cameron, who also drums for Soundgarden, is Pearl Jam's ace in the hole, though. He's zen-like behind the kit, and barely looks like he's breaking a sweat, but he's an anchor: Older songs such as "Why Go" and "Even Flow" sounded crisp, their lumbering rock-funk edges honed razor-sharp, and he ensured that the band stayed on tempo during a few sloppier moments. 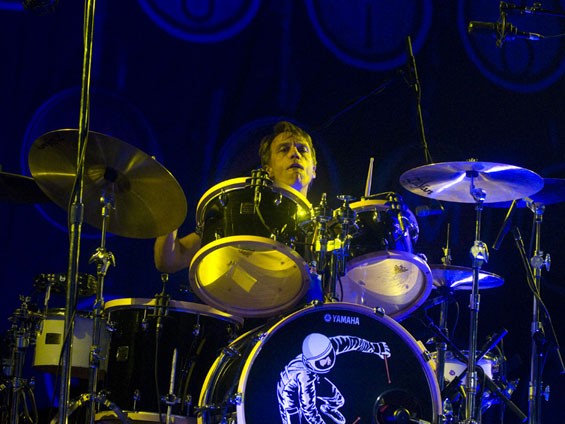 He also handled the band's stylistic shifts with ease. "Do the Evolution" - a feral, raw rocker with stinging riffs, sinewy grooves and demonic facial expressions from Vedder - was an early crowd favorite. The ruminative "Elderly Woman Behind the Counter in a Small Town" followed a few songs later; Gossard playing the part of troubadour on an acoustic, while the audience wailed the song's "Helloooo!" parts louder than the band did. Other styles touched upon included '80s college-rock (the R.E.M.-ish "In Hiding" and "Unthought Known"), white-hot garage-punk ("Save You," "The Fixer"), psychedelic-infused fuzzrock ("1/2 Full," "Glorified G"), measured melancholy (the Britrock brood "Inside Job," "Garden") and campfire sing-alongs ("Daughter," new song "Just Breathe"). 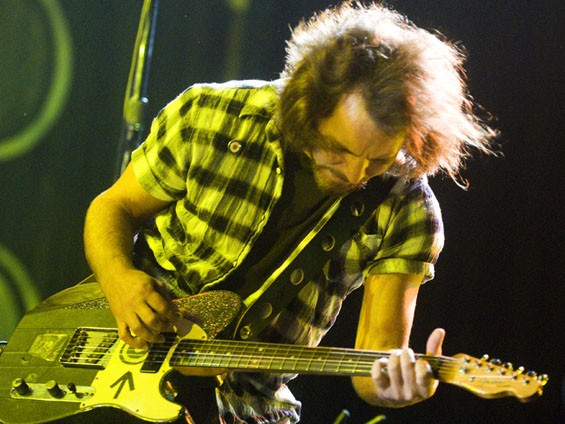 "Rearviewmirror," however, was absolutely incredible. Before the song began, Vedder commented, "I might need another bottle of wine up here." (That was his drink of choice throughout the entire set.) His request was no exaggeration, though. The song - like an homage to the Police's early, punkish days -- started off fast. And the speeding-car-with-no-brakes vibe just kept building and building as the song progressed. After the song returned from the tripped-out bridge, it exploded: Vedder's fingers flew over his guitar with jaw-dropping speed, as if he was daring his bandmates to keep up - and test the limits of their talent. The song ended with Vedder and Ament crouched in front of the drumkit, their backs to the crowd, as blinding strobes pummeled the stage in time with Cameron's rhythmic destruction.

Vedder was in rare form -- and certainly not just because of the wine. "Joe Buck, if you're here, this one's for you!" is how he introduced "Alive." When "Why Go" reached the phrase "stupid fuck" line, Vedder flipped the bird in the direction of the crowd. During a cover of the Who's "Baba O'Riley," he bashed tambourines together to add color and then tossed them into the crowd, Frisbee-style. (This kept Vedder's own personal "tambourine tech" busy; the crew member had to keep replenishing the singer's supply of the instrument from offstage.) During "1/2 Full" he held a guitar over his head, for the express purpose of reflecting a spotlight into the audience like a police searchlight.

Ever antsy, his stage moves involved what seemed like various forms of exercising (jogging in place, punching the air, tai chi). He also contorted himself around the mic stand, often hanging off of it like a monkey on a tree branch. And by the encores, he was getting restless limiting himself to the stage. Although there was nothing tall he could scale, he climbed atop the low speaker stacks on both sides of the stage to greet the crowd. Looking a bit like the wine had gone to his head, he wobbled a bit unsteadily from this perch - but never fell.

In the end, the concert was just what you would want from a Pearl jam show: no-frills rock, enough hits to please casual fans and enough surprises to satisfy the die-hards. 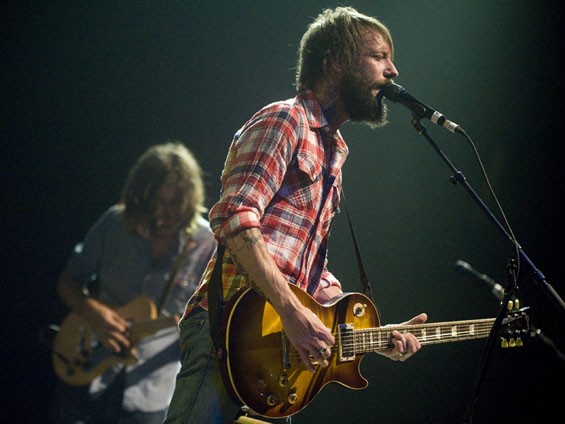 Band of Horses opened the night with a warmly-received, fantastic set. Although only its second time in St. Louis, the South Carolina-via-Seattle rustic-rock band had an enthusiastic crowd cheering it on -- "We love Band of Horses! It's why we're here!" a woman screamed at one point. This energy had to have helped the band's morale during its brief, 40-minute appearance. 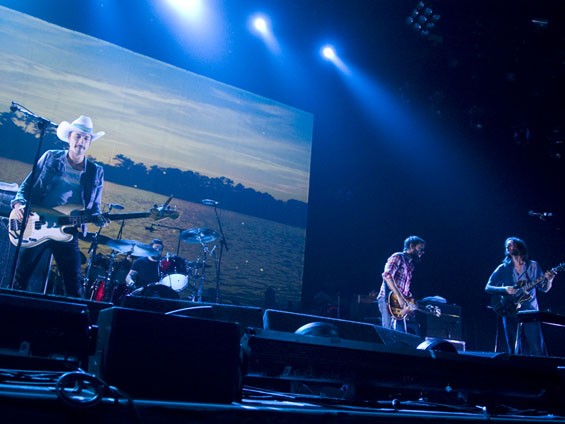 BOH's music is intimate and personal, but the band had no problem translating this feeling to the bigger stage, and connecting with the audience. Ben Bridwell's plaintive voice filled the arena like a coat of honey, and it didn't get lost in the cavernous space, even on delicate songs such as "No One's Gonna Love You." A wall of oceanic guitars drove "The Great Salt Lake," while Cease to Begin's jangly mountain-climb "Is There a Ghost?" had even more suspense, thanks to Bridwell's carefully rendered lyrical cadences. Bridwell's band mates deserve much credit for the sonics as well. Guitarist Tyler Ramsey in particular was a quietly evocative player, and cowboy-hat-sporting bassist Bill Reynolds also impressed.

The band only played two new songs from the forthcoming Infinite Arms, but they were strong contenders: The brisk, loud rocker "NW Apt." already had reworked harmonies from the studio version - an improvement -- while galloping beats drove the loping indie-twang tune, "Compliments." Although Arms is a slicker, bigger release, the new songs felt as worn-in and raw as older numbers.

The set ended with "Am I A Good Man?," a soul-tinged number that found Bridwell stalking the stage. Although soaked in sweat, he belted out the song's lyrics in a strong, resonant voice pulled from deep within. 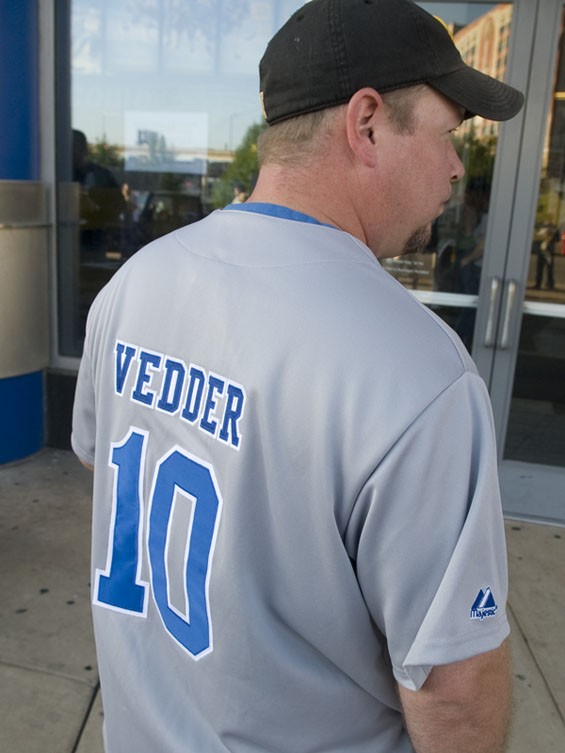 Pearl Jam setlist: "Sometimes" "Corduroy" "All Night" "Do the Evolution" "Why Go" "Elderly Woman Behind the Counter in a Small Town" "In Hiding" "Even Flow" "Unthought Known" "Save You" "Down" "Pilate" (rare) "Severed Hand" "Not For You" "Glorified G" "1/2 Full" "Daughter" "The Fixer"

Encore one: "Inside Job" "Just Breathe" "Jeremy" "Got Some" "Rearviewmirror"

Band of Horses setlist: "The Great Salt Lake" "Is There a Ghost?" "NW Apt." "The General Specific" "Compliments" "No One's Gonna Love You" "Ode to LRC" "The Funeral" "Am I a Good Man?"