One couldn't blame a band of fortysomething veteran punks for feeling a little jaded or exhausted, especially two-plus decades into its career. And it's not a stretch to say that pissed-off punk rock anthems lose some of their sincerity and vitriol over time. But in the case of California punk pioneers NOFX, neither statement is true. On Saturday night, the band stumbled into Pop's with the same sharp wit and shit disturbing attitude it showed at its last area club gig, at Mississippi Nights roughly twelve years ago.

And while Fat Mike (bass/vocals), El Hefe (guitar/trombone/trumpet/vocals), Eric Melvin (guitar) and Erik Sandin (drums) have never been absolute perfectionists, they certainly sounded as tight as they ever have. Fat Mike, NOFX's ringleader and elected mouthpiece, made sure to keep score on who was guilty for the most screw-ups. But for every lyric he may have briefly blanked on, he had hundreds of sweaty punks in his face, prodding him along and feeding him lines on the fly.

Mike attempted to keep a "positive rapport" with the fans too. Early in the set he singled out a fan in the front of the pit who was apparently flipping him the bird and asked, "Why do you keep flicking me off, man? You have no reason to flick me off -- yet." Rest assured, though, Fat Mike and El Hefe eventually gave him some reasons. Whether they were making fun of , or berating the folks on the balcony for talking on their cell phones, the band took just as many shots at the crowd as they took at themselves.

But toward the end of the set, Fat Mike made sure to show his sincere appreciation. After a genuine thank you he went on to declare that they were the best band to ever grace the stage of Pop's, and then quickly barked back with, "Wait, Bad Religion never played here, right?" And after trading racial and ethnic insults with band mates El Hefe and Melvin, Mike went on the record to announce "This is why we're better than Fugazi: We tell Hitler jokes."

At the end of the night, though, the stellar set list carried the show. NOFX came out of the gates with early classics ("Perfect Government," "Leave it Alone"), and a couple of mid-career hits ("Dinosaurs Will Die," "Seeing Double at the Triple Rock"). But a performance of its epic, 18-minute punk odyssey, "The Decline," really sent the die-hards over the edge. From there NOFX threw in a few well-received new tunes, but mostly delivered hit after hit from its ever-expansive catalog ("Bob," "Eat the Meek," "The Brews"). 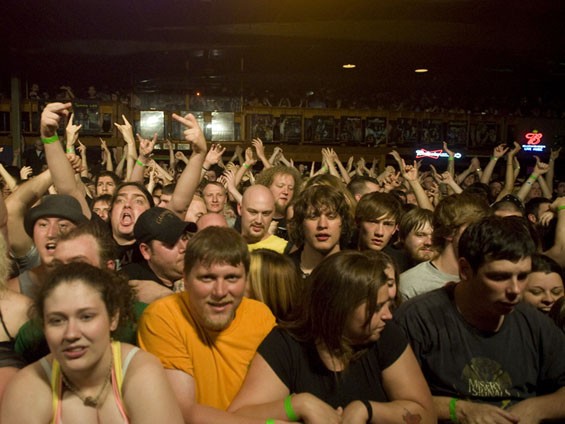 And after two-plus hours of speedy punk ragers and melodic-reggae head-bobbers, NOFX left the crowd drunk and giddy. The show served as a St. Louis punk rock reunion of sorts, and the rainfall that was coming down as security herded folks outside like cattle hardly fazed the already sweaty, soaking wet concertgoers.

*Hats off to opening quartet Teenage Bottlerocket. The Wyoming-based Ramones-core punks served as the perfect primer and surely won over a few new fans. *Shows like this usually attract a fair amount of belligerent meatheads, but the crowd was definitely on its best behavior, all things considered.

*The show actually took a serious tone when Fat Mike gave a shout out to his late mother's best friend on the side of the stage and went on to play "My Orphan Year." As El Hefe quickly noted upon finishing the song, "She's crying!"

*While Fat Mike had a bottle of Patron Tequila within arms reach on his amp, fortunately he didn't try pulling a repeat performance of his SXSW antics and offer up shots to the unassuming crowd.