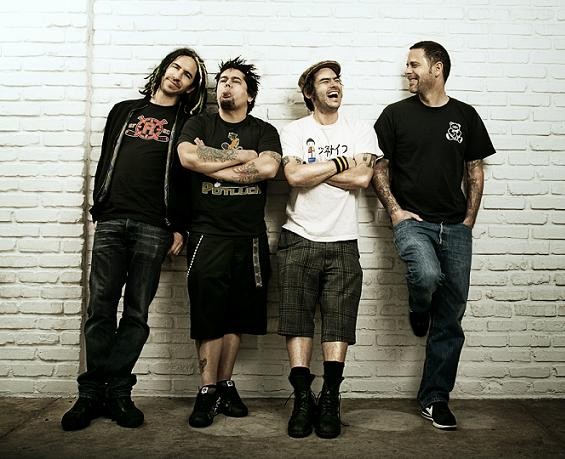 In this week's paper, Michael Dauphin scored a rare interview with NOFX figurehead Fat Mike. The band will be performing at Pop's on Saturday, May 1, its first local club appearance since the late '90s. Tickets are $20, and are still available. Dauphin touched on many aspects of NOFX's recent history, including Fat Mike's lyrical content and a controversial incident at SXSW where he fed the audience tequila shots mixed with his own urine, during a solo set performing as alter-ego "Cokie the Clown." Read on below for outtakes.

Michael Dauphin: NOFX will be playing Pop's this weekend. I know you guys have come through as part of the Van's Warped Tour, but I don't remember you playing a club gig in St. Louis since April of 1998, when you played the now-defunct Mississippi Nights. Fat Mike: Yeah, I think that's probably correct. It's been a long time. We've been busy going to places like Southeast Asia, South America and South Africa.

Are you familiar with the Sauget/East St. Louis area? No, not really. I've hung out in St. Louis a bunch because I have a lot of old friends and family there. But I don't really know where that area is.

Knowing NOFX's love for debauchery, Pop's may be right in your wheelhouse. It shares a parking lot with a gas station that apparently has off-track betting and two separate strip clubs. Well, you know, I'd rather go to a strip club than a regular bar, but it's still not really my scene. My tastes are generally a little dirtier than strip clubs. Strip clubs are a little light for me.

Your Cokie the Clown antics during your SXSW show at Emo's in Austin created some pretty heavy waves. You've since been banned from the club and TMZ apparently ran more than one feature about the story. Has there been much of a legal backlash? I didn't really have any idea that it would get so huge. All I did was a show--I was performing. And people just couldn't handle it. I didn't [talk to any attorneys]. I just did it.

Can fans expect any Cokie appearances on this upcoming tour? I don't know what I'm going to do. I have no plans for the future with that; I just haven't thought about it yet. It's just something I felt like doing.

Have any of your friends or fans accepted free drinks from you since then? [laughing] Nope. In terms of writing, it seems like the lyrics from your last album (Coaster) are much more personal than your previous records. Yeah, definitely, a lot of fucked-up shit happened to me. It's hard to write about personal subjects when nothing bad has happened to you. You hear all of these emo kid bands crying about something. It's like, "Dude, nothing bad has ever happened to you. What the fuck are you talking about?" A bunch of heavy shit finally happened to me so I tried to write about it.

Do you think it forced you to up your efforts with regard to writing lyrics? Definitely. It's so hard to write lyrics these days after writing so many songs. I think our music has somewhat plateaued. But lyrically, I think over the past ten years, I've gotten a lot better.

During the Bush era, you focused much of your songwriting speaking out against it. After his term expired, did you have to reexamine your writing style? Yeah. I'm not writing about politics as much anymore. Bush is out of office but we're still fucked and, you know, there's not that much to talk about anymore. I thought I could make a difference -- and I did make a difference, we got a lot of kids involved in politics in 2003 and 2004. We lost the election, but I thought we were helping and part of a relevant movement. But now, among other things, I still write about things that bother me.

And after all of these years, Christians and religious people still bother me more than anything. I've been to a bunch of countries in this world and the U.S. is still not a bad country to live in. People will ask, "Why don't you move out?" They obviously haven't been to other countries because it would really suck to live in a country like Mexico or Brazil or South Africa. I can still think this is a shitty country and shitty people live here but I'm not going to leave. We still have great restaurants and cable.