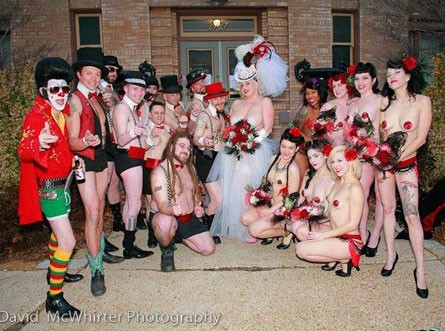 Clownvis Presley is an entertainer-about-town. When he's not scaring patrons at the zoo, he could be singing the national anthem before an inline-hockey game or hosting various revues around town. And thanks to the raunchy gossip website Dlisted, now the entire Internet knows about our man.

The site holds a daily "Caption This" contest -- and today's offering (see above) is a group wedding photo of burlesque star Sturdy Gurlesque and Dustin Indigo Charles Krueger. Clownvis officiated the nuptials, which took place at Mad Art Gallery in February, and he's featured prominently in the photo. The event was called the Spectacular Wed-tacular, and it also had performances from Lola and the Bon-Bons and the Trip Daddys. We had a slideshow about this after it happened, which you can view here. Congrats on Internet fame, Clownvis!