Question: What Do Justin Bieber and Black Flag Have in Common?

Answer: According to this Etsy listing, "Both groups have caused riots, both embrace DIY." Someone named Josiah Hughes is selling the following home-screened T-shirt, which features the iconic Black Flag bars logo merged with the name of pop sensation Justin Bieber. (H/T to the almighty Chunklet for tweeting this; possible inspiration for this shirt right here.) See: 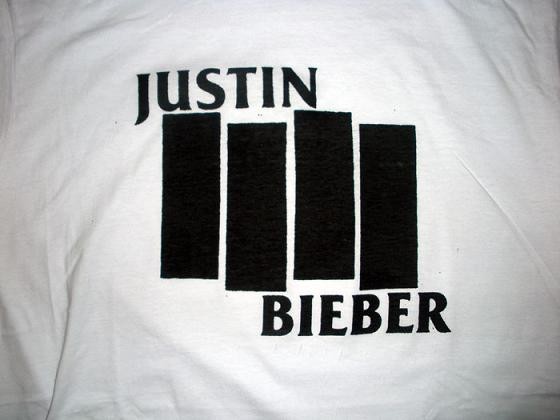 Hughes has a point on the riot part; Bieber keeps having to cancel appearances due to fan injuries and hysterical crowds. This chaos won't abate anytime soon, especially since he was just named to People's 2010 Most Beautiful list. Plus: He continues to be the subject of countless Internet memes and hilarity.

Conan O'Brien challenged him to a playful Twitter trending-topic war (relevant posts here and here), while the tumblr Lesbians Who Look Like Justin Bieber is making the rounds.

The Black Flag-related humor on the Internet is nothing to sneeze at, though. The blog Illegal Contraption recently collected photos of "Black Flag breakfast." Like this: