The sold-out Yeasayer show last night at the Gargoyle was full of last -minute tumult. Sleigh Bells canceled due to a family emergency (but will be back on the tour as of today in Minneapolis). In addition, there was a lack of communication between the Gargoyle and concertgoers -- some of whom drove from hours away, only to lose their chance to attend the show because of a policy that allows Washington University students admittance over the general public (see sign posted at Edison box office here.) The Gargoyle website did not list any information about the concert about the show, and presumably, this lead to many not understanding the show was sold out before they had arrived.

Like a UFO landing, Yeasayer took stage lit against a pulsating, projector-like backdrop of green and the foreboding eeriness of "The Children." Chris Keating's low, distorted vocals and the dark ambience of the first track of this year's hugely successful Odd Blood proved an ominous introduction. There's an anxious and paranoid quality to Keating's voice that's most effective when delivering world-weary lyrics like "2080"'s "I can't sleep when I think about the times we're living in / I can't sleep when I think about the future I was born into." Live, it plays perfectly against Anand Wilder's full, natural high tenor. These purveyors of futuristic tribal-beat mysticism are currently touring with a full-time drummer and a multi-instrumentalist/percussionist. 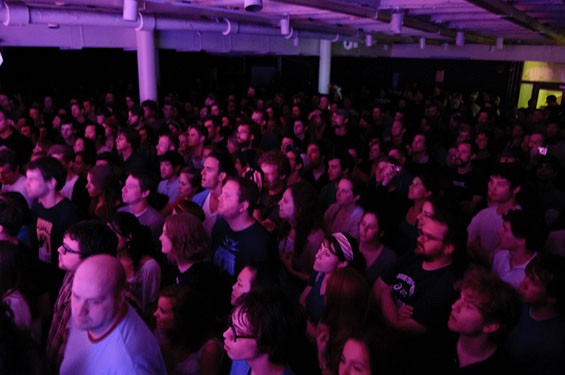 Though the crowd was responsive and head-nodding during anthems such as "O.N.E" and "Wait for the Summer," Yeasayer called the audience "tame." It seemed a bit unfair, because the band was a little lackluster itself. (Maybe it was just a case of the Mondays in St. Louis.) After finishing its main set with "Ambling Alp," Yeasayer made it back on stage for a two-song encore that included "Sunrise" and finally left a more rambunctious crowd then before.

Chicago's Yawn was the surprise opener tapped to fill Sleigh Bells' shoes. On songs such as "Empress" and "Kind of Guy" -- which are found on its self-titled EP -- the quartet delivered soundscapes that popped with effervescent playfulness and captured delicate innocence. However, Yawn's set was diverse -- from new track "Sing Low," a collision of Panda Bear and Atlas Sound, to the lush, psychedelic sounds of "Acid."