Two tall figures stand mouth to mouth with a lone microphone, each raven-haired and pale in the blue light. Alison Mosshart bores into Jack White, who pretends to watch his hands move on his guitar. Silhouettes and voices melding and retreating, they are towering four-alarm fires, side-by-side, bleeding into each other. They repeat the lines again, breath on breath, "Just because you caught me, Does that make it a sin?"

That, my friends, is showmanship. After a day of tornado sirens, the Dead Weather raged inside the Pageant last night with howling grooves from the deep and dark. It was a show that no doubt cemented worshippers in White's well-deserved cult of personality. 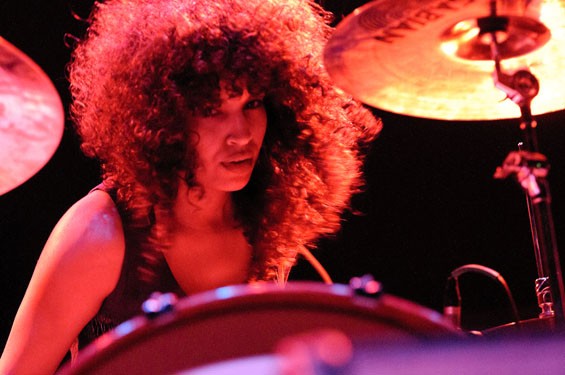 A female-fronted four-piece from Nashville, opening act The Ettes turned up the volume, playing fast and fierce. According to Annie Zaleski's dead-on description tweeted from the show, the band was a "rockabilly queen fronting a garagescuzz band." Vocalist and band leader Lindsay "Coco" Hames sang in high yelp, echoing brazen Gossip vocalist Beth Ditto. Long-haired lead guitarist Johnny Cauffiel tore it up too, but drummer Maria "Poni" Silver on drums was mesmerizing -- her shaggy fro flying, muscular and loose, and liberally whipping her kit. The Ettes has serious talent, but the group sounded most memorable on bluesier -- even poppier -- stomps, when Hames' sweet growl rose above the cymbal crashes.

Immediately following the opener, the theater of the Dead Weather began. As smoke filtered in from the wings, roadies set up the stage dressed in Memphis mafia uniforms: black suits, bright blue ties, black hats. A silver-and-black emblazoned curtain, like the backdrop of a Scandinavian death metal show, revealed itself. Then out of the darkness, cloaked by an assault of strobe lights, the Dead Weather emerged.

Jack White's latest chemistry experiment brings together Alison Mosshart (The Kills), Dean Fertita (Queens of the Stone Age, The Raconteurs) and Jack Lawrence (The Raconteurs, The Greenhornes). Combined with White surrounded by drums, the Dead Weather sounded like a controlled explosion of neo-goth machine-gun blues.

Mosshart crashed to the front, immediately asserting her dominance over Fertita's lonely guitar lines. Standing on the monitors in gold boots, she leaned long over the crowd and screamed, "I'm 60 feet tall!" -- and actually looked it. By second song "Hang You From the Heavens," the crunch of Lawrence's massive bass had Mosshart slinking all over the stage -- and the crowd was completely at her mercy. Not enough can be said about the jaw-drop power of the Kills front woman, who White introduced as "the raven-haired beauty from the deep, deep South: Baby Ruthless." During the swampy, hypnotic horror of "Rocking Horse," my concert companion said, "She's like the snake charming the snake charmer." 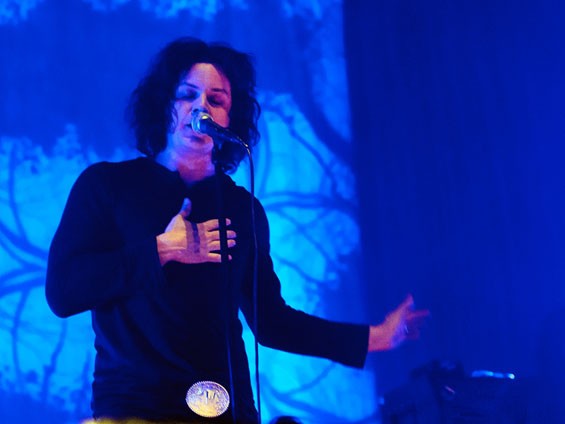 Of course, no matter Mosshart's powers of enchantment, the biggest cheers went up whenever White picked up a guitar or stepped to the front, as he did on a cover of Them's "You Just Can't Win," which was heavy with vocal and facial tics. White behind the kit was also a treat; he funked up "I Cut Like a Buffalo," while choke-boxing into the mic. Between Fertita's Phantom of the Opera organ riffs, the crowd shouted, "Is that you choking, or are you just joking?"

By the time Dead Weather killed the final encore of "Treat Me Like Your Mother" and staggered as a group to the front of the stage, young guys around me were flung back in their seats, muttering, "That might have been the best show I've ever seen." In addition to musical prowess and the virtuosity to reinterpret and move between genres, the members of the Dead Weather possess stagecraft and fearless charisma that comes around once in a generation. White and Mosshart - these are rock gods that giveth and taketh away - and don't ask your opinion.