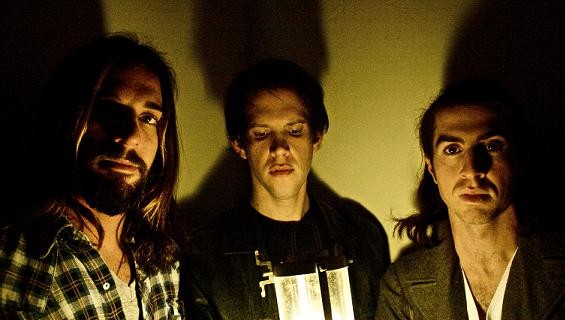 The Whigs delivered a powerful blast of pure rock & roll last night at The Gargoyle, thrilling its hardcore fans in the front row and generally impressing the rest of the 80 or so concertgoers. The Athens, Georgia, trio displayed its abundant talent and winning chemistry with a grunge-with-a-tinge-of-southern-rock attack, and appeared to be having a blast on stage. This energy was much appreciated in a tiring night of delayed start times and technical problems that plagued both the headliners and openers Troubadour Dali.

The Whigs preferred to build their set to screaming heights gradually, as it started off with the slow but bouncy "Nothing is Easy." Pleasing as it was, it was mostly an appetizer for highlights like the anthemic garage rocker "Hot Bed," the driving "Like a Vibration" and the rootsy stomp of "Right Hand On My Heart." A number of tunes from this year's In The Dark also shined in the absence of that album's sterile overproduction, though raucous performances couldn't save generic duds such as "Hundred/Million" and "I Am for Real."

But even lesser songs were made tolerable through the Whigs' near flawless playing. Tim Deaux drove the band with his fluid and precise bass playing, that fed perfectly into Julian Dorio's fill-heavy pounding. This set a base for guitarist/singer Parker Gispert to thrash and belt -- and he did not disappoint. Between kicking out one leg and hopping on the other and a few fierce punches through his strings, Gispert proved an intense and engaging frontman.

Unfortunately, a power outage in Gispert's guitar equipment halted The Whigs' momentum just as they started "Kill Me Carolyne" to a chorus of cheers. After a lengthy delay, the band recovered nicely and got one of its best responses of the night. Next song "Dying" appeared to sap the regained steam with its plodding pace until an explosive noisy guitar solo made everything make sense. Gispert later manned the keys for the dreamy ballad "Half The World Away," which made for a nice change of pace before the Whigs went out with a bang with the ferocious punker "Need You Need You." By then, a handful of people had left, but those who stayed were thoroughly rocked.

Local psych veterans Troubadour Dali fought through mic problems and a mix that washed out the bass in an otherwise entertaining set. The group pulls off a neat trick by making jangly songs with arena-ready spacey reverb that feel larger than life yet intimate at the same time. The guitars sounded fantastic and did a great job of conveying a relaxed, trippy atmosphere. The set was a bit samey, which made it a bit too easy to tune out Troubadour's lesser tunes, but the band was usually on. Bonus points for the unique light show: A slide projector showed a clear spinning plate with colored liquids.

Flaming Death Trap continued to impress with a short, scrappy set. The quartet plays catchy ditties filtered through a scuzzy '90s distortion (think Pavement) that are anchored by frontman Anthony Maurice's sing/shout and guitarist Daniel Andrew's hummable leads. The band showed some rough spots (bending guitar notes out of tune, Maurice singing away from the mic) but ultimately succeeded with its ace songwriting and a lively stage presence.