April 23, 2010 at 2:02 PM
comment
Looking for weekend fun that won't break the bank? We humbly present these ten suggestions for weekend entertainment, which all cost $10 or less. Flip the bird to bottle service-ordering schmoes sunk into the velvet couch of some fly-by-night dance club; this weekend, enjoy outdoor Earth Day parties, grimy dance music, a trip to the Science Center and a spin on the Tilt-A-Whirl, all for a Hamilton or less. Looking for more live music? Consult the St. Louis weekend concert calendar.

Bruiser Queen at The Firebird (Friday)
Bruiser Queen is playing its first show tomorrow night at the Firebird (2706 Olive Street). That's the new band featuring drummer Jason Potter of defunct garage-punks Left Arm, bassist Ben Ellebracht and Morgan Nusbaum, bassist of indie-pop act the 75's. The cover is $7. Doors open at 8:30 and the show starts at 9:30. Annie Zaleski has more info on Bruiser Queen's formation and a link to an MP3.

Le Castle Vania at Sol Lounge (Friday)
Atlanta-based DJ Dylan Eiland, aka Le Castle Vania, has toured all over the world. On Friday night, he brings his dark electronic music to Sol Lounge in Midtown. It's just $10. For more info, check out the Facebook page for the party.

ITAP Prom at International Tap House (Saturday)
Love great beer? You'll need to attend the "ITAP Prom" at the International Tap House (161 Long Rd. #107) in Chesterfield, at 7 p.m. on Saturday night. It's an official part of St. Louis Craft Beer Week, which begins on Friday. Naturally, you'll need to be 21 to enjoy. And yes, you can wear your old prom dress. Check out the Facebook page for the event to see who's going.

Bin Laden Blowin' Up at the Gramophone
Bi-weekly dance party London Calling is hosting BBU, aka Bin Laden Blowin' Up, at the Gramophone (4243 Manchester) on Saturday night. The music of the trio of Chicago-based emcees lands "somewhere between M.I.A. and Dead Prez" and received praise from all-important national tastemakers Pitchfork. More info for the night is on the event's Facebok page. It's just $4 before 10 p.m. and $7 afterward. 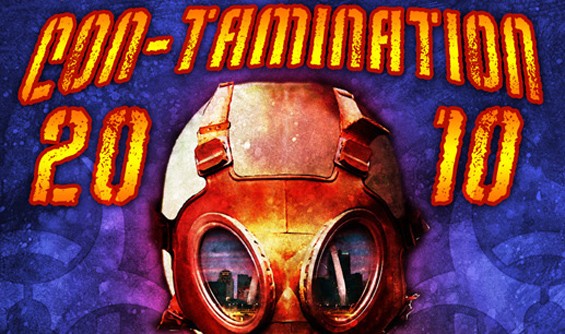 Con-tamination Kick-off Party at Atomic Cowboy's Fox Hole (Saturday)
Con-tamination is the name of St. Louis' first-ever horror, sci-fi and pop culture convention, and while the real con doesn't get started until next weekend, on Saturday night, there's a kick-off party at Manchester landmark the Atomic Cowboy (4140 Manchester Avenue). The cover is just $5 and the party runs from 8 p.m. to midnight. Network and mingle before the real convention, which runs April 30 to May 1. For more info, check out the event's Facebook page.

St. Louis Earth Day Festival 2010 at The Muny in Forest Park (Sunday)
Forest Park hosts the city's 40th Anniversary Earth Day Festival. The Species Parade starts off the fest at 11:45 p.m., so arrive early, dressed like your favorite animal of any species. The festival is set up in themed neighborhoods where you can learn about topics including sustainable living from renewable energy sources, purging one's home of harmful chemicals, reducing the use of wasteful materials, more effective modes of transportation and other elements of healthful living. Admission is free. Continue reading about St. Louis Earth Day 2010 at the Muny in Forest Park.

Darwin exhibit at Saint Louis Science Center (All Weekend)
The new exhibit at the Saint Louis Science Center (5050 Oakland Avenue), lays out what the naturalist discovered, how he discovered it and how his world led him to it. Displays of mounted skeletons demonstrate how scientists in Darwin's day perceived and cataloged the world, while an exhibit focusing on his five-year voyage on the Beagle reveals the clues that set him on the track of natural selection. A video re-creation of Darwin's "thinking path" also allows you to complete the journey of thought and investigation that Darwin did. The exhibit is open daily through Sunday, August 1, and admission is free. Continue reading about the Darwin exhibit at the Science Center.