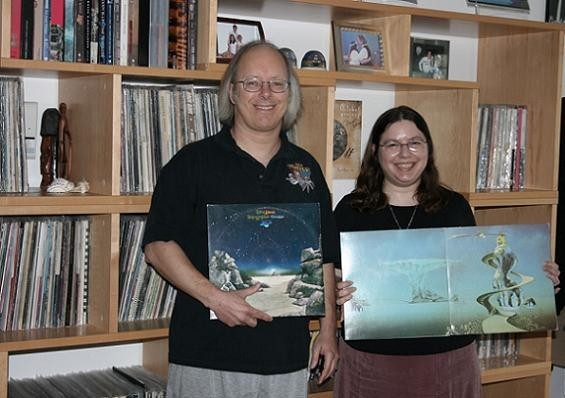 Not all record collections are as serendipitous as the one shared by Boeing employees Rhea Frankel and Roy DeRousse. Frankel, 35, and Derousse, 54, met and eventually married due to their mutual love of the band Yes and progressive rock. They've now combined their 1,400-piece LP collection and displayed it as the focal point of their living room on a prog-rock-worthy piece of modern furniture. We caught up with the endearing couple and discussed the "progressive community." Come back tomorrow for more, including chat about DeRousse's collection of wacky picture discs.

Last Collector Standing: What is it about Yes that has made them the centerpiece of your collection? Rhea Frankel: I started listened to Yes when I was fourteen. I heard them on the radio. I grew up in Philly and they were really big in Philly. People knew who they were, like they don't out here. I started buying albums; actually, at the time it was cassettes. I started getting everything I could get my hands on. If there was a solo album at a used record store, I had to buy it. If there was a cassette single that had a different track on it than the album, I had to buy that. It got to the point that anytime I go to a record store I go to the Yes section first thing and see if they have anything I don't have.

Roy DeRousse: My introduction was hearing "Roundabout" on the radio when it first came out. When I heard that, I was just completely blown away because I'd never heard anything else remotely like it. I think Fragile was probably one of my first albums. From that point on, Yes has always been my favorite band. Like Rhea said, [I started] buying everything I could get my hands on.

Didn't Rick Wakeman [Yes Keyboard player] have an Ice Capades album? DeRousse: Rick Wakeman had three big albums out in the 70s. His third one was an album about King Arthur. For whatever reason, he decided he was going to present this in London on ice! So he had people dress up as knights and horses, and all these people skating around while his band performed "King Arthur." He gets made fun of quite a bit for that. [Laughs]

What do you think is the importance of Roger Dean's album artwork on shaping Yes' career, and for your interest in the band? Frankel: For my interest it was an added nicety, but the music still would have been there. I think it gave them an image the way that bands in the '80s had flashy videos. Something you could look at as well as listen to. Yes managed to do that in the '70s with the artwork. I like it. I collect it because I think it is really cool looking, but I heard the music on the radio and got into it that way. I guess I should let you answer this. [Laughs]

DeRousse: Yeah, to me it was part of a total package. You would get a new Yes album and you would see this amazing artwork, and they complimented each other so nicely. [Roger Dean] and his brother actually designed some of their stages back in the '70s, and they were quite elaborate. The combination of the otherworldly music and art put together made it a different experience than your normal rock & roll band.

I've got to ask, when the movie Avatar came out... [both start laughing hysterically] I told all my friends that they had to go see the movie because it was like a Yes album came to life. As big fans do you feel the same way about that? DeRousse: No question. It's Roger Dean all over the place. I'm surprised there haven't been lawsuits. It looked beautiful. I liked seeing it.

Frankel: There's a website out that has screen captures of Avatar and compare it to some of the album covers. Unfortunately, one of the Avatar art directors said, "No, I wasn't familiar with Roger Dean, but we think his stuff is 'whimsical,' and we weren't trying to go that way."

DeRousse: To get back to your question why we like progressive rock, Yes and progressive rock in general are my favorite just because they are trying to do something just a little bit different than standard rock & roll.

What turned you onto progressive rock? Was it just that they were doing something more than rock or do you think they were trying to make a grander statement? Frankel: I just think it's beautiful. At first it was, "What other bands sound like Yes?" I'd meet older fans who would make recommendations about other bands and follow up on that. DeRousse: I just like the mix of influences. You can hear some classical pieces in there. You can hear some jazz piece in it. I like all those kinds of music as well. Being able to mix them together and being able to find something unique... for some reason, I can't tell you why, but I like it. Frankel: Then, there is this whole little sub-world of it, where there are several music festivals a year and Internet stuff. So you kinda get sucked into the community of it as well. [Both laugh] DeRousse: We're laughing because we are really good examples of that.

You'd say you belong to the progressive community? Both, at the same time: Yes! DeRousse: We have a lot of friends all over the country, and world exactly, that we've met because of the music. Frankel: That's how we met.

Tell me how you met? Frankel: You mean you think we both just worked at Boeing? [laughs]

DeRousse: I'm still sort of amazed by it. Rhea and I got married in 2002. It was the first time I'd been married, and the first time she's been married. We met in San Luis Obispo, California, in 1996, and Yes were doing a reunion. It was one of the classic line-ups. They produced the album Keys To Ascension. They hadn't played together since... 79, maybe? Frankel: That line-up. DeRousse: Each of us individually decided we just had to go there. They were playing... it originally was supposed to be two nights, but they ended up being three nights. She, from Philadelphia, flew out there. I, from St. Louis, flew out there. We happen to have some friends in common. We ended up meeting each other at that point, and seeing some fantastic concerts and being with a bunch of our friends.

I met her for the first time and nothing really romantic happened, but we kept in touch. About a year later she flew out here for a visit. We hooked up from that point on. Now, she still lived in Philadelphia for quite awhile and it was a long-distance relationship for a few years. Frankel: I moved out to St. Louis in 2000.

But Yes and progressive rock is essential in connecting you Frankel: That's how we met. DeRousse: Definitely, and since that point we've shared many adventures because of it. 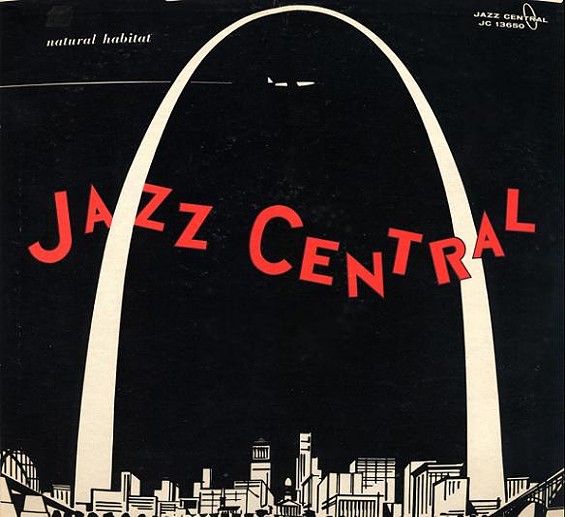 Has progressive introduced you to new forms of music that you never heard before? Frankel: I wouldn't have heard any jazz fusion if it wasn't for progressive music. I heard it through the Bruford band (Yes/King Crimson Drummer Bill Bruford's side project). You know, you would read about Yes in magazines and they would talk about other bands. That's why I bought Mahavishnu Orchestra. Just reading about it, not knowing what they sounded like.

DeRousse: In my case, it was a little bit different since my dad [Ralph DeRousse] was a jazz musician. I grew up listening to jazz, and we would play classical music on Sundays. I didn't listen to a lot of pop music until I was in high school. They just didn't play it in the house.

My dad was a bass player. He started out in the '40s. He had a band in the army. He went on to do some touring with some different touring bands. I would call it second-tier. He wasn't with the Benny Goodmans or any of the big names back then. When he moved to St. Louis, he got married. With musicians, it's hard to support a family. He kept playing, but he also got a day job. One of the things he did was with a band called Jazz Central. They made one album called Natural Habitat. It came out '65 or so {Editors note - the album actually came out in 1959.}

A lot of the most well known players [in St. Louis] participated. They called themselves Jazz Central because at the time there was an East Coast sound, which was a little harsher than the West Coast sound that was a little smoother. So they decided, "We're going to do something in-between." That's Jazz Central!

A lot of people don't realize, jazz is sort of respectable these days, but back in the day it was like today's rock & roll. They were looked down upon in certain quarters like they were these rebels. They just wanted to do their own thing like most artist and make this music and hoped people liked it.

They put out the one LP. It's a really cool cover. The Arch I think opened up in '64 or something. It was very new when this came out. So they incorporated the Arch with downtown and a plane flying through. This is illegal by the way. You can't fly through the Arch. [Laughs] I've got a copy hanging up in our living room