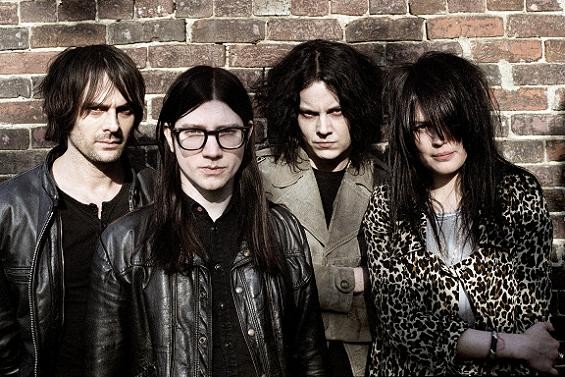 The Dead Weather's résumé is stellar: The quartet features White Stripes/Raconteurs figurehead Jack White, Kills vocalist Alison Mosshart, Queens of the Stone Age's Dean Fertita and Raconteurs/Greenhornes member Jack Lawrence. Together, the musicians meld and subvert genres - shuddering blues, lusty electro, ominous jazz, stylized cabaret noir and bellowing classic rock - in creepy, sexy and cool ways. (Just take a listen to its scrambled, chaotic cover of Gary Numan's new-wave classic "Are Friends Electric?" for proof.) The quartet debuted a little over a year ago and released its debut, Horehound, last July. Surprisingly, its sophomore release, Sea of Cowards - which was recorded in Nashville at White's studio -- is already finished and will be in stores on May 11. If lead single "Die By the Drop" is any indication, fans of the band don't have to worry about a sophomore slump.

The Dead Weather's Saturday appearance at the Pageant marks its first show in St. Louis - and will function as a homecoming of sorts for bassist/jack-of-all-trades Lawrence. The musician was born in Belleville, Illinois, and lived there until the age of six; his dad is an East St. Louis native who worked on the railroad, specifically Chessie System (which later merged into CSX). When reached via phone, the soft-spoken Lawrence was in Nashville outside an antiques store, while his wife shopped inside.

Annie Zaleski: You have a new album coming out already. Was it written concurrently with Horehound? How did it come about? Jack Lawrence: It kind of came while we were touring. We were taking some breaks in between touring, whenever we had time to record. This band's really great; we just keep coming up with song after song. It comes from us really inspiring each other.

I guess the big question everyone wants to know: How is the new music comparing to Horehound? It's a little more aggressive this time. I don't know if that was just from being on the road, or touring and writing it, or just figuring out how to work with each other, maybe? The first album was the first time we really just were together playing. This time we've had a little more time to learn from each other. The songs...some of them are heavier, there's a song off it that's kinda...I don't know, a little more soul, almost?

What's your favorite song so far? Do you have one? It's always changing, but one that we've been playing live, "Hustle and Cuss." I've been liking that one. It changes a lot. We have a song on there that could be a hit song - except no one's really talking about it for a single, which is strange. The only people that really have mentioned it so far have been a couple of Japanese reporters.

"Die By the Drop" stood out to me, because it seemed like it has a way more focused groove. Immediately, I was like, "Whoa." That aggression makes sense, then, because it's definitely very in-your-face, pulsating-in-your-chest type of thing. I think that was just coming from being on tour and wanting to play more of those kind of things for the crowd. It seems like the audience wants a little more of that. However it happened, I think Dean [Fertita] started writing that riff for the chorus and we all just chimed in with other parts. That's just really how that one came about.

All told, how long did it take you guys to record Cowards? I'd say three weeks total. It was here and there a few days, we really...we came back and finished most of it through December and January. Alison's been recording with the Kills during the same time, so she'd go with them a couple weeks and then come back with us. Are there any other different influences on this record? Not really; it's hard to say. They've happened so quick. Releasing two albums in the span of a year doesn't really happen these days. [laughs]

I was going to say, bands don't do that anymore. It's definitely old-fashioned. Yeah, bands in the '60s did it a lot. Even country artists up until maybe the '70s just started doing it. I don't know - it's a different approach. I think it comes from us just wanting to play together and having that drive. We really inspire each other as artists. There's a great need to produce music and art whenever we're around each other. It was more of, we couldn't stop it, really. I think that's why this record happened so quickly. It's not like a choice by anyone - especially the label or anything like that. It's coming from us wanting to make music.

What have you learned from everyone in the band, in the context of the Dead Weather? It's hard to say what you learn from people, but it's there. This band's great, because everybody's coming in and writing, so we're all listening to each other. A lot of bands, it doesn't work that way - one person will come in with a song, and then everybody does their part. This one, there's a lot of ideas getting thrown around and everyone's communicating and excited for someone to come up with something.

You can tell the chemistry you guys have, in the songs. I don't know where that comes from. Maybe it's just because we're older now, and we've been through bands and been with bands. The Greenhornes, we've been playing for fourteen years. We've all done time being on the road or in the studio. All the egos are out of the equation now, it just gives you a lot of freedom to work.

For you, then, when you're playing on stage with the Dead Weather, what stands out to you as opposed to the Greenhornes or the Raconteurs? What stands out to you playing live? [immediately] Alison. Alison, yeah. It's great having someone that really controls the stage like that. You look around and you see everyone's eyes fixed on her. I can, you know, stay back and just concentrate on making good, exciting music.