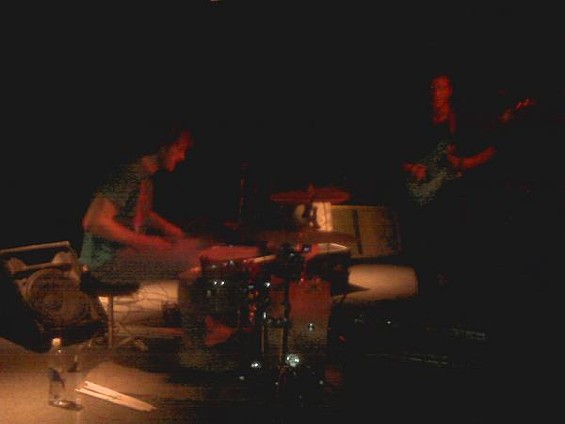 As the duo started its set, it put on a track of samples featuring electronic hisses and whirs that would be an ambient backdrop for the entirety of the spazzed out sonic assault. The show did not include any material from their previous album but instead was done improv-style. Some sections were completely improvised and others were practiced only a handful of times -- without pause. Hill relentlessly hammered out ambitious, face-melting polyrhythms while Reinhart played guitar and manipulated a board of around twenty pedals for optimal distortion. In essence, this was an outstanding performance piece that captured a fleeting, harmonious moment between two musicians.

What struck me most was how they both achieve a very physical performance, as a result of a total emotive, organic understanding of music as a language. Hill's prodigious skill and self-taught training can result in nothing but natural style and visceral force. He's built a well-earned reputation for being one of the most physical drummers in the business, and last night's bashing and contorting was proof of his honorary title.

The local opener, Spelling Bee, is also a noisy-drummer-and-guitarist duo. The set had an experimental rock/ post-punk feel with shades of thrash and math rock. Female lead singer Mabel Suen (who also plays guitar and saxophone) may be small in stature, but she releases loud and, at times, screeching lyrics that are barely discernible but still potent. "Omelets" was the highlight of the set; it incorporated a free jazz saxophone breakdown and evidence of Spelling Bee's experimental range.