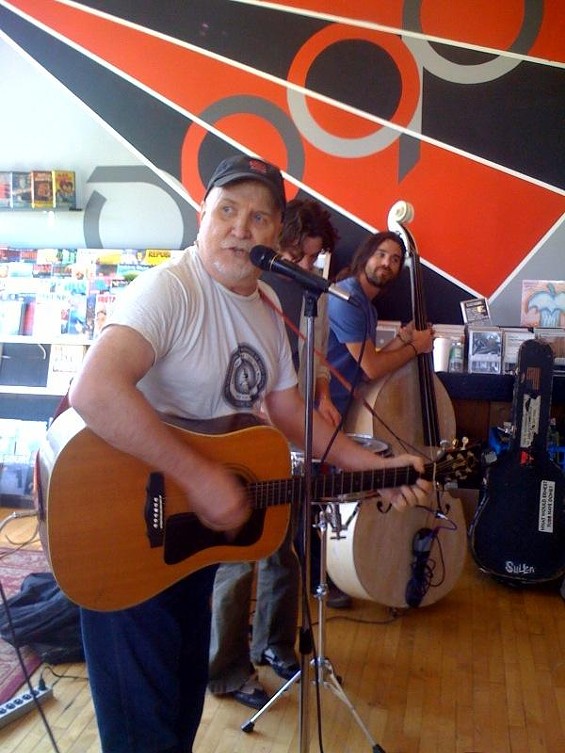 On Saturday, April 17, St. Louis was treated to a whole day of BBQ, beer and full-blown sonic wonderment as Apop Records proudly hosted its second-annual Record Store Day since moving to the Gateway City in 2007.

In the age of digital downloads, the hustle and bustle of the crowd between CD and vinyl racks was a pleasant sight to see. Apop stocked the shelves with RSD exclusives such as the Sonic Youth compilation Hits Are For Squares, TV On The Radio's Dear Science reissue, and Soft Machine's Live at Henie Onstad Art Centre 1971 LP.

KDHX DJ Jeff Hess (of Afternoon Delight fame) lent a hand as he spun fresh vinyl cuts between sets, easing the crowd with the likes of early Human League, spoken word and modern pop classics. In addition to the festivities, Apop's founder Tiffany Minx teamed up with Freezerburn brainchild Mister Ben to release a limited-edition zine in celebration of Record Store Day. Featuring interviews with the Medical Tourists, Strangulated Beatoffs and a DVD cataloging selected videos from the Lepers TV archives, Freezerburn has raised the bar for contemporary St. Louis zines.

The day kicked off with a mounting crowd, eager to see local rock & rollers Pretty Little Empire. After tapping the keg of delicious New Belgium Fat Tire, PLE launched into a set full of its twang-inspired indie rock, a more intimate performance preceding its evening show at Off Broadway. Quick to follow was Skarekrau Radio. Scaled down from the normal seven-plus person line-up, the trio deviated from its usual set list of psychedelic/no-wave tunes, in favor of a white noise trance. SkR's Wiggpaw whirled his guitar into a frantic coo, while the other members kept the audience in a sonic fog.

The day trudged along with a performance by Burn The Mute. Bordering along the lines of nu-metal and progressive rock, BTM continued the momentum of the day with an array of mid-tempo jams for a more than attentive crowd. Up next were the stylings of electronic waif .e (a.k.a. Dottie Georges). Equipped with two electribes, a few pedals, and two guitars, Dottie performed a handful of her punk-beat standards. Chock full of beeps, blips and feedback, this one-woman band didn't disappoint.

After dropping from the set schedule, Egg Chef was replaced by spliff lord trash dogs, Pink Sock. Mirroring last year's performance, the duo writhed in electric freedom as the crowd attempted to digest the oddball scene. Almost in complete contrast, South City Legend Bob Reuter geared up for what was to be a memorable set. With his perfect catalog of blues-driven rock, Reuter's timeless rock & roll spirit shined through as he proudly dusted off an incredible rendition of Jefferson Airplane's "White Rabbit," to the astonishment of the packed crowd. 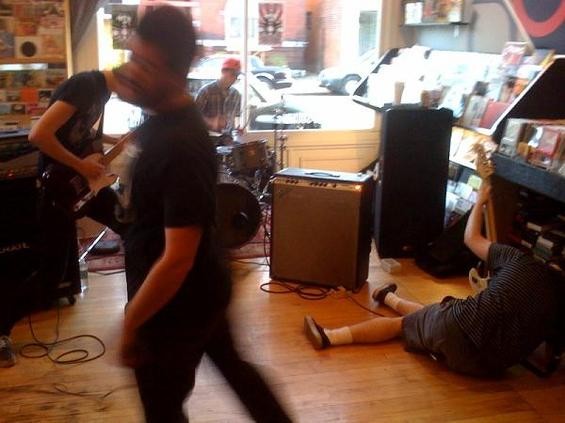 Straying from the usual "business up front, Party in the back" model, Apop was proud to throw a storewide fiesta extending to the backyard. St. Louis' own BBQ Champions, Nick Zengliner (Maximum Effort front man) and Chris Baricevic (founder of Big Muddy Records), provided food for the anxious crowd. Vegan soup, potato salad, kabobs, and hot dogs were just some of the many treats offered by the duo behind All Sauce (a top secret South City BBQ sauce). A homemade photo booth provided by Ann K. Hubbard was one of the many highlights; it clocked in with over 2000+ photos throughout the day's festivities.

As day turned to night, things switched with some heavy hitting acts. Jeremy Kannapell (aka Ghost Ice) took hold of the turntables, busting a variety of party classics and avant grooves. Half Gay (comprised of Floating Laboratories' founder, Kevin Harris, and mixed media wizard Mike Stasny) kicked off the night with an electro dance party. This costumed, drums-and-synth duo turned up the fun by adding a dancer touting a fake gun. After a quick set of herky jerk beats and pulsating synth rips, the crowd was eager to move on to the meat of the night.

The U.F.O.-conspiracy-themed punk band, Maximum Effort, drew a large crowd as it blazed through a set of new punk anthems. After watching them over the past few months, Maximum Effort has moved from a basement punk band to a well-oiled force of nature. Faster, tighter and animated, it was a pleasure to see these kids killing it in the name of fun. Shaved Women followed with a heavy foot. As one of the more exciting new bands in St. Louis, these kids sure know how to make their mark. In the vein, of bands like Pissed Jeans, Sex Vid, and late-period Black Flag, SW played a feedback-induced set, gripping the audience by the throat. In a rare live performance, St. Louis' own Strangulated Beatoffs riled the crowd into a frenzy, quenching their thirst for industrial, nonsensical art damage. This untouchable trio of Stan Seitrich, Fritz Noble and a special collaborator only known as Mole demolished the drunken crowd with spastic crooning and walls of aural devastation. Coming from the almost-forgotten era of second round no-wave and Skin Graft Records, the Beatoffs' thundering performance trumped any notion of irrelevance.

Rounding out the night was Glow Dick, the new project from Joe Hess of Spelling Bee and Sleep State. Heavy and brooding, this trio laid down dirty, sludge-laden rock influenced by the likes of the Jesus Lizard and Scratch Acid. Glow Dick blew away the debauched crowd, sending off the beer brigade into the night.