When I interviewed OK Go frontman Damian Kulash, he said that he thinks rock & roll is not the just beats, chords, melodies and lyrics of a song, but also the inaudible actions that accompany the tune's performance. In other words, Kulash feels Elvis' swinging hips are as important to rock & roll as his voice. His band's performance last night at the Old Rock House made a strong case for his philosophy, as OK Go wowed the crowd with a spectacular array of bells and whistles piled on top of a sturdy foundation of tight musicianship. 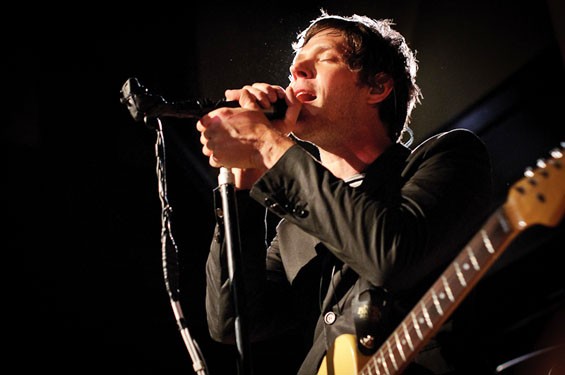 The quartet launched into its nineteen-song set with arena rocker "Invincible" before breaking out the confetti cannon during the spaced-out psychedelica of "Needing/Getting." A projection screen backed up the band and alternated between up-close shots of the group and abstract videos such as exploding drumsets and bikini-clad women being splashed with water. The band plugged along efficiently, hitting their mark for each disparate genre they tackled, whether dance-rock ("A Million Ways," "I Want You So Bad I Can't Breathe"), soft-rock ballads ("Oh Lately It's So Quiet") or garage rock ("Seemed Like A Good Idea At The Time"). All the while, Kulash bantered like a pro, offering jokes, humorous tales and playing the role of the showman perfectly.

Then the group brought out the hand-bells. You read that right: Operating under the pretense that we were sinning for going to rock show on a Sunday, Damian felt that hand-bells would somehow save us.

OK Go - What To Do (Live at the Old Rock House in St. Louis, MO) from Jason Stoff on Vimeo.

The quartet then treated the crowd to a stunning hand-bell and bell-kit arrangement of oldie "What To Do" that rightfully received rapturous applause. It would be tough to top, but Kulash didn't let up. Instead he took his guitar and mic to the center of the floor for a solo performance of ballad "Last Leaf" in which he stopped and turned around in between verses so that everyone got a view at some point. By now, OK Go had total control of the audience and kept the momentum going with crowd pleasers "Don't Ask Me" and "Get Over It" before blazing through the Pixies classic "Debaser" and leading the crowd through a sing-a-long of "This Too Shall Pass." 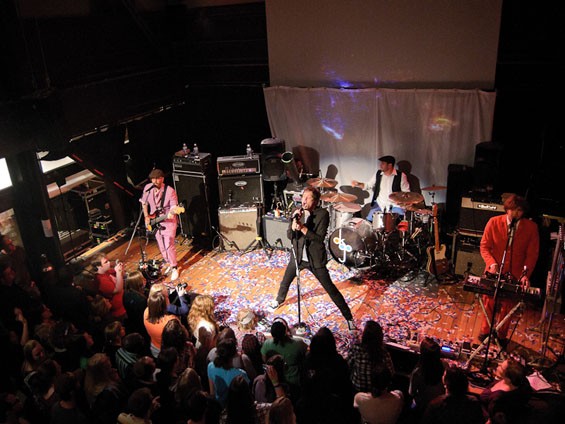 What could they possibly do for an encore? Two words: Laser guitars. Fitting the neon funk of "WTF?" and "Skyscrapers", the group emerged with lighted guitars equipped with laser pointers to keep the party going. Truth be told, the spectacle became slightly tiring by the end, but it didn't detract from the group's fine performances. OK Go finished with a spirited rendition of "Do What You Want" to close out one of the best shows of this young year.

Although they didn't have any laser guitars, Brookyln power trio Earl Greyhound had flash to spare in their smokin' hot riffs and drummer Ricc Sheridan's thunderous fills. The group trades in '70s styled blues-tinged glam rock and makes a ton of righteous noise on stage. Earl mostly played material off of their week-old Suspicious Package and succeeded in kicking out the fuzzed-out jams. The crowd showed polite approval throughout the set but was truly blown away by the breakdown in the nine-minute psychedelic epic "Monkey." In sharp contrast, The Booze rattled off a solid set of no-frills garage rock. The Atlanta quintet went through every move in the rock playbook, throwing out 1,4,5 chord progressions, country backbeats and occasionally familiar riffs but polished musicianship and well-crafted songs helped it all go down easy. Special mention must be made of bass player Johnny Gleaton, who held down the rhythm perfectly and got a great popping out of his instrument. The band seemed to stack their best songs toward the end of their set which lead to a satisfying finish.