Photos + Video: Tef Poe and The Force Own the Gramophone

Just when it seems like the monthly (or thereabouts) hip-hop extravaganzas hosted by the Force at the Gramophone are getting stale, they go and put on a show like last Friday's.

Basically the same cadre of artists from the local underground collective has been throwing down at the venue on a regular basis for more than a year now. Maybe they're hitting their strides as performers -- or maybe their material has just improved that much over the past twelve months. However, the hip-hop revue that happened in support of Tef Poe's mixtape Money Never $leep$ was impressive -- both from a musical standpoint and because the artists are supporting each other in ways that rappers in most other cities can only dream about.
Corey Black led things off with a handful of tracks and then ceded the stage to Family Affair, who battled microphone problems but still managed to sound solid debuting new material from their upcoming release, Welcome to the Underground.

From there Finsta and Tech Supreme grabbed the mics and took over as masters of the  ceremony. Finsta took the opportunity to promise the revival of the legendary hip-hop Mondays at the Hi-Pointe if, in fact, Par Lounge is dead as Annie reported last week.

From there out it was almost all Tef Poe. He was joined on-stage at times by a half-dozen artists who collaborated with him on the new record, including Corey Black, Rockwell Knuckles (check the video below), Theresa Payne, Teresajenee and Family Affair. 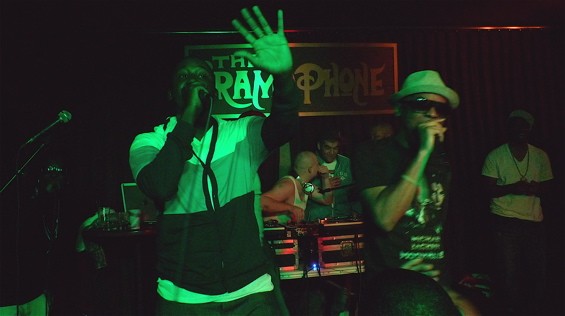