Show Review + Setlist: Ben Folds and a Piano Triumphs Despite a Distracted Crowd

Ben Folds and his piano rocked the Chaifetz Arena last night, despite the less-than-intimate venue and somewhat-inattentive crowd.

The personable popstar didn't chat as much between songs, possibly because it's hard to unite a crowd in an oversized venue like the Chaifetz. For such an intimate tour (he really is just one guy and a piano), he seemed put off by the 10,600-seat venue; he alluded to it a handful of times throughout the show.

"This is a nice cozy joint," he said by way of an introduction after playing "Free Coffee" and "Annie Waits."

The show was put on by Saint Louis University's Student Activities Board, and was free for SLU students, a fact that likely annoyed the diehard Folds fans in the audience. The large crowd was mostly students, and those in the stands were more interested in texting, tweeting and talking than watching the man on stage.

At this point in his prolific career, to call Folds a pro just doesn't go far enough. But he is, in fact, more than a pro; he has performing down to an exact science. He's a dynamic, polished performer who knows his audience, and every move he makes receives a response he's anticipating. Anytime he stood up up while gnashing the keys, the crowd went wild. He used the stage to great effect, punctuating certain hooks and choruses by pounding his booted foot on the ground while tickling the ivories.

Fold blazed through the 90-minute set, playing new stuff along with the crowd pleasing favorites "Still Fighting It" and "Zak and Sara." 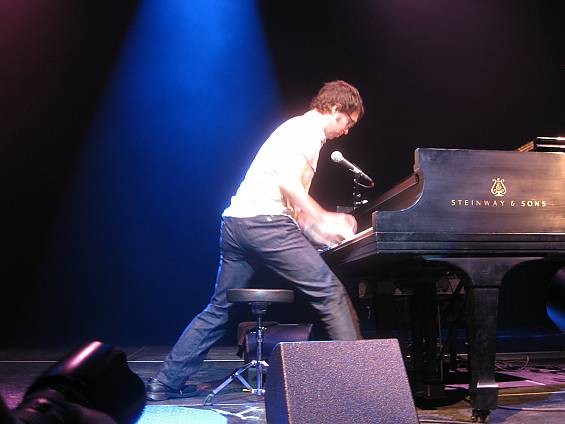 Folds played a few tracks off a forthcoming album he co-wrote with High Fidelity writer Nick Hornby. "You know he's British, he thinks we're all crazy. This first song he wrote watching the RNC in 2008," Folds said before launching into the hilariously topical song "Levi Johnston's Blues," about the Alaskan teen who impregnated former VP candidate Sarah Palin's daughter Bristol. (The chorus? "I'm a fuckin' redneck, I live to hang out with the boys/Play some hockey, do some fishing, kill some moose/I like to shoot the shit and do some chillin', I guess/Ya fuck with me and I'll kick your ass.") "It's asking a lot of a stadium-like crowd to listen to new music," he added after playing "Picture Window," a wistful new cut.

Like any nerd worthy of the distinction, Folds is no stranger to the Internet. In 2006, he became the first person to live-stream a concert on Myspace, and a few weeks back, footage from one of his shows went viral when he incorporated freaky internet fad ChatRoulette into the performance, improvising songs for each unsuspecting chat partner. During the encore, there were a few in the crowd with "CHATROULETTE" signs, but sadly, Folds didn't do a repeat of his Baltimore performance. The slower tracks didn't play as well with the crowd as the classics did, though the crowd ate up the newer song "Effington," which is loosely based on Effingham, Illinois. But Folds engaged the crowd and further demonstrated his music genuis on "Not The Same," during which he taught the crowd a four-part harmony, and left his perch on the piano bench to conduct when the time came.

On "Steven's Last Night In Town," a roadie brought a single drum to Folds' side at the piano, and he moved effortlessly from piano to drum. The roadie carried the drum across the stage while Folds wailed on it. Within seconds they had set up an entire drum kit. Folds wowed the crowd for a few moments with an energetic drum solo before tossing his drumsticks in the air and sauntering back to the Steinway to finish the song.

He finished the set with the biggies: "Brick," "Army" and "Rockin' the Suburbs." The crowd booed the roadie who came on stage to fix something on the piano in the minute or so that Folds was off the stage before the encore, but all was forgiven when he came back and brought volunteer on stage to sing the second verse of "Bitches Ain't Shit," a Dr. Dre track he frequently covers. He ended the show like a true professional with a barnstorming rendition of "One Dwarf and 200 Solemn Faces."

Critic's Notebook: It's a good thing he didn't talk politics too much; there were a few furtive boos when he poked fun at the Palins. Perhaps he saw the in-house advertisments for decidedly conservative events like Glenn Beck with Bill O'Reilly, and Father John Corapi.

Personal Bias: I know I'm risking being called a mad old shrew here (wouldn't be the first time, trust), but at times, the crowd acted as if Folds was an afterthought. One thing that was true when I went SLU and hasn't changed in the past couple years--SLU kids have impeccable manners when people are looking, but can be downright rude when the spotlight is off. While the hundreds on the floor rocked out, those in the seats talked, as if we'd all come to sit in a dark room to text and talk about which party to hit after the show. Just because a show is free for you doesn't give you carte blanche to be a douche.