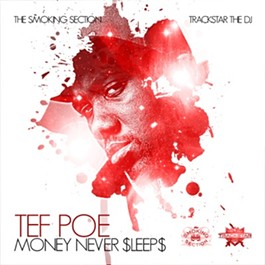 Tef Poe is a little schizophrenic on his new record. That's a good thing.

Among his multiple personalities (self-diagnosed in metaphors and similies) are "the backpacker version of Yo Gotti,"  Michael Jordan with a Scottie Pippen trigger finger, and "the rap version of Richard Pryor." The latter, of course, is because he's on fire.

The most frequent boast is calling himself "PoeBama." The comparison to the POTUS makes perfect sense on sprawling, intricately rhymed tracks such as "Ghetto Gospel" when he has the swagger, ambition and grand ideas of a man who wants to occupy the hip-hop equivalent of the Oval Office. Other times it's hard to imagine the Commander in Chief -- or anyone other than Tef, for that matter -- having the balls to say he's going to "dig up Aaliyah, put my semen in her corpse."

If you haven't heard the album click over The Smoking Section and download it stat. Don't let the necromantic braggadocio scare you off. Then get your quality hip-hop loving self to The Gramophone tonight to hear Poe perform some cuts live, along with a whole slew of his cohorts from The Force, many of whom appear on the record with guest verses and production work.