"St. Louis, you and I will fuck by the end of the night." So said Matt Caughthran, man of mischief and lead singer of the Bronx. Last night at Pop's, he and his Los Angeles-based band seduced with punk vulgarity -- and the promise of letting loose. 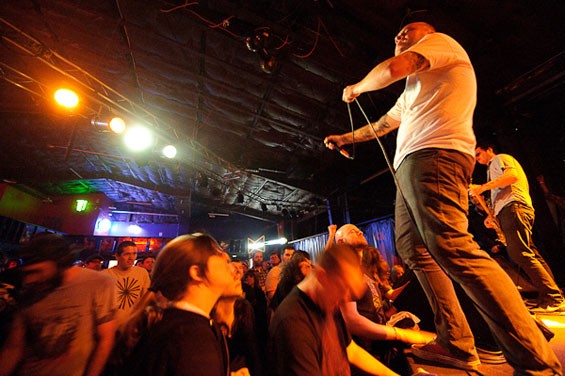 Caughthran conducted much of that seduction from the crowd floor, where he sang and moshed along with the audience. Not often do you see singers leaving the stage multiple times in one evening; it's even rarer do you see the sustained residencies to which Caughthran committed. And after an hour of such commitment, things felt dirty, damp, and deep, just like after any good seduction. 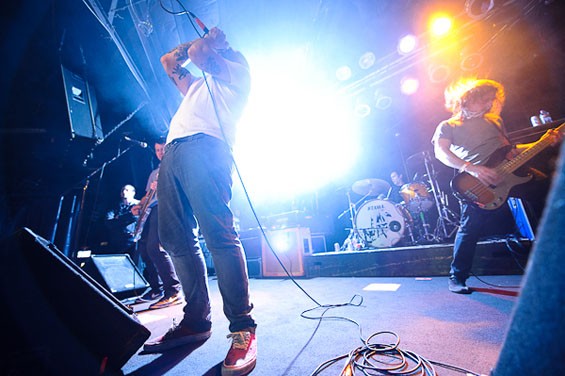 The music coming from the stage was just as thrilling. The band -- Joby J. Ford and Ken Horne (guitars), Brad Magers (bass) and Jorma Vik (drums) -- pulled from all three of the Bronx's self-titled albums. "Shitty Future," "Six Days a Week," "White Guilt," "False Alarm" -- each was an elegant variation on jugular-squeezing, full of bending and staggering garage riffs and bunched backbeats. (See set list here.) Caughthran's voice, already a hoarse scream, became a laryngitic plea by the time of closer "Heart Attack America." By then, the Bronx had just about conscripted participation from everyone there with its accretive aggression. Most participation, though, was voluntary.

If last night was a punk seduction, Mariachi El Bronx -- a band opening for itself -- was the foreplay. 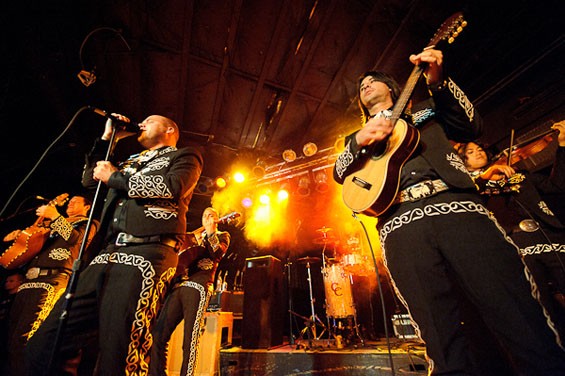 Spin-off, one-off, adopted persona -- whatever it is, it's not a farce, and the Bronx take its Mexican music en serio. By the standards of traditional mariachi, Mariachi El Bronx may fall short, but the band's willingness -- charro suits and all -- to rub shoulders with such music was admirable, and a lot of fun. Given what would happen later, Mariachi El Bronx was the compliment that vice paid to virtue. 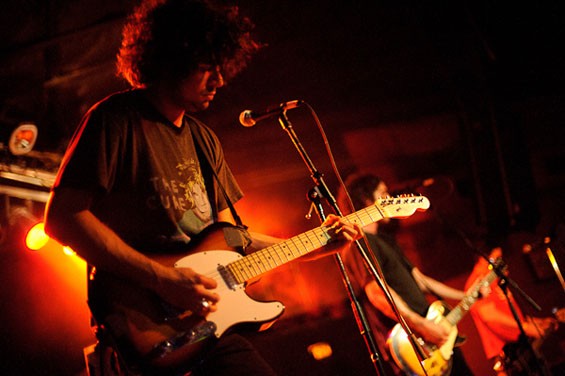 Another California outfit, Dead Country, started the concert. A new band, its song "Euro Thrash" has been pushed by Los Angeles tastemaker station KROQ. That song was characteristic of the set: layered guitars, agreeable harmonies, all more grown-up and better arranged than is usual for such mainstream pop-punk. 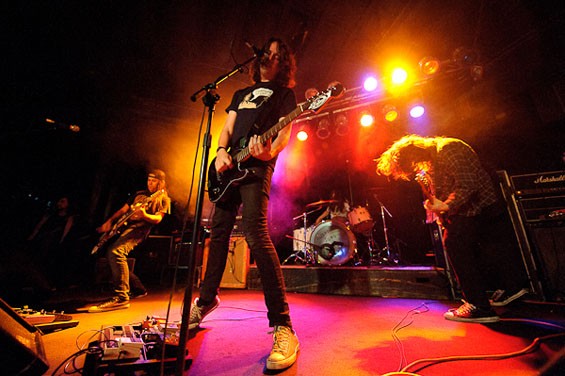 Unfrozen from a cryogenic chamber time-sealed in Seattle at the end of 1991, Violent Soho played a string of songs that plopped out like nuggets from a well-fibered horse. If period-specific grunge is the band's lodestar, Violent Soho is blind to its thrashing excesses, deaf to its more egregious musicianship -- and not a great endorsement for its resurrection.