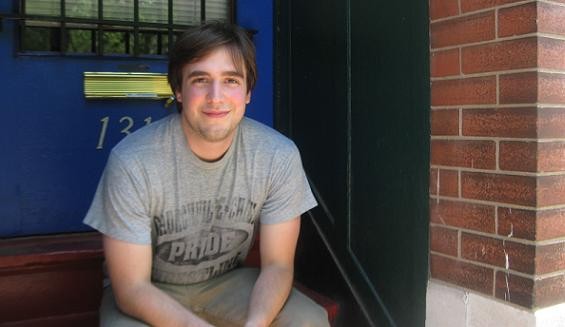 Open Lot might be one of the city's most exciting hidden gems. Tucked away in an old yeast factory in Lafayette Square, the space stands unassumingly behind Square One Brewery, next to residential housing and...an open lot.

Since opening in October 2007, Open Lot has embraced the likes of experimental musicians, innovative graphic designers and avant-garde studio artists. Initially conceptualized by the trio of Aaron Jacobson, Jonathan Lisenby, and Jordan Hicks, Open Lot has quickly evolved from an art-house experiment to an established pillar of the St. Louis art and music community (It's even moving beyond the city's borders: Open Lot recently established a Nashville chapter.)

Over the span of two and a half years, the space has seen its fair share of creative minds perform or exhibit in front of attentive and enthusiastic audiences. National musical acts such as Wet Hair, Sic Alps, Jack Rose and Deep Jew have graced the numerous corners of this beautiful space; art-wise, St. Louis native Gale Davis (illustrator) and in-studio sculptor B.J. Vogt (mixed media) have shown work there.

As the seasons change, we find summer approaching a new St. Louis--hot on the heels of something fresh and real. Hicks took time out to answer some questions about Open Lot's role in and impact on the community.

Josh Levi: In bigger cities, an art space such as Open Lot is often hard to come by, let alone operate for a number of years. In terms of start-up and sustainability, what makes St. Louis different? Jordan Hicks: I suppose that the obvious answer is "cost." In a city with more development pressure, there is no way that we'd be able to afford a space like this, especially operating it the way that we do. Open Lot is not a business or a non-profit; We don't make any money off of it, nor do we try to. But money is only part of the story. For us to host the events that we do, we need a vibrant -- if relatively small -- community of people interested in challenging art, music and design. In this way, St. Louis and cities like Buffalo, Detroit and Pittsburgh exist in the center of the Venn diagram where low cost of living overlaps with an engaged, creative community.

What benefits to St. Louis have come from running a musically/artistic/culturally diverse venue? How has this affected the art/musical community? We only host a dozen or so concerts every year, a few gallery exhibitions and maybe a film screening or two, so I don't want to overemphasize our impact. However, I feel that the diversity that we promote here has, in some small way, helped to cross-pollinate local creative communities. There are probably a few visual artists in town who have been exposed to experimental music that they might not have heard otherwise, and a few musicians who have been exposed to new ideas in visual art from coming to shows here. It's a small thing, but you never know what it might lead to.

Over the years, many great acts (often under the radar) have come through, forever leaving their mark on St. Louis. What events were most treasured for you? We had the pleasure of hosting Jack Rose here in the spring of 2008, and again last September. His playing, both times, was jaw-dropping. He will be missed. But there have been so many great shows here that it's hard to pick a favorite. John Wiese shattered ear drums and we loved it; Mountains played 30 minutes of the most beautiful ambient I've ever heard; Raglani has played here several times, and every time it has been a treat; Sharon van Etten's voice sounded even better live than on record - I didn't think it was possible.

To many, Open Lot is an integral component of St. Louis' progress and significance in the national arena. Locally, who/what do you see mirroring these grassroots ethics and motivational attitudes? There are a number of music venues in town that I think share the same spirit - Floating Laboratories comes to mind. I've seen some great shows there, on the river bluffs, while watching barges gliding by. Stirrup Pants, the poetry chapbook shop on Cherokee, is also pretty exciting to me, and seems to have similar attitudes and flexibility. It's a shop, but also the venue for Sloup (a series of arts grant soup dinners) and often hosts readings and performances. I should also mention that it probably never would have occurred to me or the other founders of Open Lot (Aaron and Jonathan) to host concerts were it not for Spooky Action Palace, the dearly departed basement venue in Dogtown. Michael from Spooky Action was a great resource and is a good friend.

What lies on the immediate horizon for Open Lot as an open studio/gallery/venue? What would you like to see? On Saturday [April 17], we'll be hosting Dutch lute player and composer Jozef van Wissem and New York free improv duo Che Chen and Robbie Lee. van Wissem played here last year, and it was unbelievable. He plays the lute in a very contemporary way, not afraid of empty space or dissonance. He'll take bits and pieces of baroque lute tunes and turn them into musical palindromes. He'll be playing as a trio with Chen and Lee, as well. They're calling themselves Heresy of the Free Spirit. Local artist N.N.N. Cook will open the show. And, our current gallery show, a series of drawings, projections, and kites by Illinois artist Kristen Bartel will be up through next weekend - if you come to the concert you'll be able to see it.